Aspiring car, truck, diesel, and heavy equipment mechanics like you can get direct training that provides opportunities in fields with high demand. By including lots of hands-on practice, automotive programs enable students to start getting the practical abilities valued by repair shops, dealerships, and other auto-industry employers.

Plus, consider this: Automotive schools in NJ allow you to train in one of the highest-paying states for this skilled trade. New Jersey simply has a lot of great opportunities for qualified specialists in automotive and diesel technology. And that means your future could be even brighter than you thought possible.

So discover your own path forward right now. Enter your zip code to find out where you can start training to become the professional automotive mechanic you'd like to be!

3 Terrific Reasons to Get Automotive Training in New Jersey

3 Terrific Reasons to Get Automotive Training in New Jersey 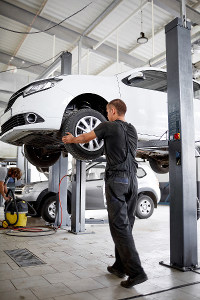 Motor vehicles are just about everywhere. Nearly all of us either drive or ride in them on a regular basis. And they all need to be maintained. That much is obvious. But did you know that New Jersey is an especially enticing place to develop practical expertise in automotive technology? Here's why:

1. The Demand Is Strong

Northern New Jersey—including areas like Bergen, Middlesex, and Union counties—is close to New York City, which is a major center of employment for many people in the Northeast. As a result, the region's highways are full of daily commuters who put a lot of wear and tear on their vehicles.

In fact, a number of statistics show why this state is one of America's best markets for automotive maintenance and repair. Just take a look at these facts:

New Jersey is among America's top-paying states for this vocation. In fact, according to data from the Occupational Employment Statistics program, the average hourly wage for an auto technician in NJ was $23.38 (about $48,620 yearly) in 2018. That was 11 percent higher than the national average for the trade.

And diesel technicians can earn even more. The average New Jersey wage in that area of the trade was $26.68 per hour (about $55,500 annually), which was about 13 percent higher than the national average.

3. You Get to Learn More About What You Love

As a car or truck enthusiast, you may already know a lot about certain kinds of vehicles. But just imagine having professional-level knowledge that you can make a living from. New Jersey automotive schools frequently offer training programs that cover fascinating areas like:

How to Get Started

To get your start in this promising industry, find the New Jersey automotive schools that are nearest to you. Simply enter your zip code below to begin!