Discover how a mobile app development course or full degree program can help you get started in one of America's top occupations.

By learning how to make apps for iPhone, Android, or other mobile platforms, you'll give yourself the opportunity to start prospering from this rapidly evolving field. As a mobile app developer, you can take advantage of your strong interest in technology while creating fun and useful applications for smartphones, tablets, and wearable devices. Plus, many app developers earn high salaries. And the prospects for ongoing job growth in this field continue to look strong.

So get the skills to develop outstanding user experiences for people who like to stay engaged and connected wherever they go. Today's training options are more varied and relevant than ever before. Find out if you live near a mobile app development school by entering your zip code into the search tool below!

Learn How to Make Apps: FAQs About Becoming a Mobile Applications Developer

Learn How to Make Apps: 7 FAQs About Becoming a Mobile Applications Developer

Are you eager for a low-stress technology career that provides a real sense of personal satisfaction? You may not have to look any farther than this thriving field. In fact, according to at least one prominent list, mobile app developer ranks as the number one best job in America.

Of course, before you can start benefitting from all of that potential, you first need to understand how to become a mobile app developer. Find the answers you need by exploring the frequently asked questions below. In addition to training requirements, you'll discover more about what mobile app developers do, how much money they earn, and why their job prospects look so bright.

1. Do I Need to Attend a Mobile App Development School?

Most working professionals in this field would probably recommend getting an education in computer science or completing some type of formal software development or mobile application development training. That way, you get the opportunity to learn how to think and solve problems like a smart developer while understanding the logic behind why things work the way they do. A formal education can also give you greater access to built-in support and mentorship, which can be very important when learning the many concepts and practicalities of how to make apps for Android, iOS, or other types of devices.

That said, you don't necessarily need to earn a computer science or mobile app development degree. Some people successfully learn to make apps through various combinations of online courses, coding boot camps, self-taught projects, and trial and error. However, in general, going to an app developer school tends to be the most reliable way to gain the foundational skills and understanding you'll need.

Keep in mind that many employers will only consider hiring mobile app developers who have formal training. Without a degree, your job prospects may be a little more limited. And you'll need to place extra focus on putting together a strong portfolio of real projects you've developed.

2. Should I Learn How to Make iPhone Apps or Android Apps?

There really isn't a right or wrong answer to this question. Plus, there's no rule about making apps for just one platform. It's true that, while you learn app development, you may, at first, only focus on one platform. But as you get more comfortable with the process and start learning new programming languages, you may start developing apps for multiple platforms.

When it comes to mobile app development training, many degree programs feature coursework that's relevant to making iPhone apps as well as making apps for Android. They also tend to include courses in web development that are useful for making non-native apps that work across all platforms.

Even so, part of becoming an app developer is deciding where to focus your efforts. Nobody masters everything all at once. And you may decide that you want to specialize in one platform versus another based on factors like its popularity or your comfort level with its programming languages and development environments.

One of the main reasons for Android's popularity—especially among entry-level developers—is the fact that it's available on a wide range of devices from different manufacturers, which can make it easier to access inexpensive devices for testing. Plus, getting a finished app onto Google Play tends to be easier than getting one into Apple's App Store.

3. What Programming Languages Do I Need to Know?

Most of today's mobile apps are developed with object-oriented programming languages. The specific languages that are used generally depend on the platforms that apps are being developed for as well as on the strengths of particular developers and the needs and goals of particular projects. According to the same survey of app developers mentioned above, the most popular programming languages include:

The global app developer survey found that about 65 percent of mobile app developers around the world said that they use Java, which is often helpful when making apps for Android. In contrast, to make iPhone apps, you generally need to use Objective-C or Swift. Making cross-platform apps is usually accomplished by using HTML 5 and CSS 3 along with other languages like JavaScript.

Swift, which was introduced by Apple in 2014 and made open source in 2015, is considered one of the easiest programming languages to learn. Many developers also praise Swift for enabling them to write simpler code that's more reliable.

In addition to programming languages like those listed above, a lot of app developers benefit from knowing languages used for database management (such as SQL, which stands for Structured Query Language). They also sometimes use server-side scripting languages like PHP or web application frameworks like ASP.NET.

4. What Does a Mobile App Developer Job Description Typically Include?

5. What Are the Most Popular Types of Mobile Apps to Develop?

One of the greatest things about having a career in this field is the sheer variety of mobile apps that can be imagined and developed. When people say, "There's an app for that," they're usually right. Mobile technology now touches almost every aspect of our lives. Take a look at the categories that the surveyed global app developers said were their highest priorities:

More than 40 percent of app developers ranked the creation of games as a major priority—the highest percentage of all categories. So if you like the thought of making fun and memorable games, then this field offers many opportunities to do exactly that.

6. What Is the Median Mobile App Developer Salary?

In 2021, the median salary of an applications software developer in America was $120,730, according to the Occupational Employment and Wage Statistics program. The highest-earning app developers made more than $168,570. The top-paying states for this occupation included California, Washington, Maryland, New York, and Rhode Island.

7. Does the Future Look Bright for Mobile App Developers? 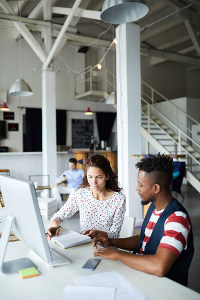 The short and simple answer is yes. Right now is a great time to become an app developer. Projections from the Bureau of Labor Statistics show that 189,200 jobs for applications software developers are expected to become available each year, on average, between 2020 and 2030. Overall employment in this field is expected to rise 22 percent over that period.

Good developers should continue to be in high demand, especially for the development of mobile apps. Just look at some of the numbers behind this demand:

As mobile technology continues to spread, advance, and evolve, it's likely that more and more employers and clients will need qualified app developers. Trends such as the Internet of Things and the rise of artificial intelligence (AI) could make mobile app developers even more important and valuable in the coming years.

Get Your Own Future Underway

These days, it's easy to find an app development course or degree program that can help you become a mobile app developer. So why not get started? Enter your zip code into the convenient search tool below to find a nearby school right now!