Think about it: As the problems of global climate change become more and more obvious, environmentally sustainable sources of power are being recognized as a real necessity. That's why it can be truly advantageous to become a wind turbine technician. Schools offering this type of leading-edge education are helping people get started in a field that benefits not just professional wind techs, but also everyone else on the planet.

After all, wind energy schools focus on teaching industry-ready skills for installing, troubleshooting, and repairing one of the world's best technologies for generating clean, renewable electricity. The regular maintenance of wind turbines is simply essential for their effective and ongoing operation. So wind energy technicians are at the forefront of an electrical revolution, one that is helping to create a brighter future for all of us.

What could possibly be better? Use your zip code to find a wind turbine school in your region today! 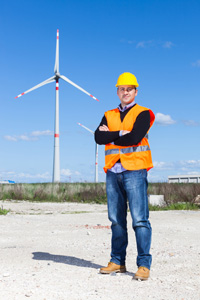 Just like almost every other nation, America has a growing need for electricity. But many of our traditional ways of generating it (such as burning coal and natural gas) contribute to the emission of greenhouse gases, which get trapped in our atmosphere and warm the planet. As a result, the world's climate is changing, which threatens the survival of humans and many other species.

But plenty of reasons for hope exist. In fact, alternative technologies like solar and wind energy are proving to be more than capable of helping us generate the power we need—without the harmful effects of other sources. And as these technologies become more widespread, they are creating powerful opportunities for people who want both a great career and the chance to help change the world for the better.

Here's why getting wind energy training can be such a smart idea:

Wind turbine technology is one of America's fastest-growing employment sectors. In fact, employment projections from the Bureau of Labor Statistics show that jobs for qualified wind techs are expected to grow much faster than average between 2018 and 2028. They could grow in number by an astonishing 57 percent over that decade. A lot of that growth is thanks to ongoing technological advances that are making wind energy more competitive in terms of cost and electrical output, which will continue to get even better. Plus, look at these facts: 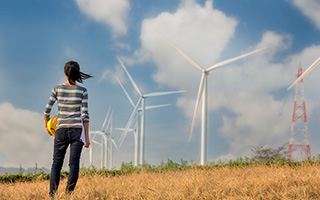 Data from the Occupational Employment Statistics program shows that, in 2018, the average yearly pay of a wind turbine technician in America was $58,000. And the highest earners in the wind energy trade made over $83,560.

Wind techs often find their jobs exciting and enjoyably challenging. They get to climb tall structures and perform most of their work outside in the fresh air. Plus, many of their tasks are highly engaging. For instance, consider the fact that they are frequently involved in:

Training to become a wind energy technician doesn't usually take very long. In fact, some programs take less than a year to complete, and the longest ones generally only take between 18 months and two years. That means you can attain the career-ready skills that employers in the wind power industry are actively looking for and start making money in a relatively short period of time.

Why not use this moment to find wind turbine technician training in your area? All you need is your zip code to perform a quick search for nearby programs!