Does the possibility of having a fun and engaging career inspire you? The digital arts, entertainment, and interactive media sectors continue to thrive and grow in new and exciting directions. As a result, the demand for skilled and talented professionals remains strong within the industries that produce video games, films, TV shows, recorded music, live events, websites, mobile apps, and other types of media products. So your future might soon involve bringing things to life that delight people's senses and enrich their day-to-day experiences. That's why media arts training often has a big impact. It can help you stand out and make your talents more valuable. Plus, programs are easy to find.

Why not give it a go? Enter your zip code into the following search tool to locate a media arts school in your region or online!

Few career sectors today are as exciting as the media arts, especially if you love playing with technology and being creative. You simply won't find many other vocational categories that offer so much potential for having fun and using your inventiveness to help create new worlds, interactive experiences, or impactful communications.

After all, more and more of the world's media consumption is moving into the digital realm. Electronic platforms are enabling media producers and creators to experiment and discover fresh, innovative ways to tell stories, deliver information, spread messages, build virtual communities, and foster play and learning. Just look at these facts about digital media in the U.S. from comScore:

Those stats represent only a small fraction of the many positive trends within the media arts sector. As technology evolves and people's habits change, new opportunities arise for qualified professionals with all kinds of creative and technical abilities. (That's one reason why this field offers such a great range of jobs for autistic people.)

Salary information is based on data from the Occupational Employment Statistics (OES) program for 2018.

Computer-generated images (CGI), motion graphics, and special effects are becoming more sophisticated with each year that passes. And they are often some of the most essential and celebrated aspects of video games, movies, and television shows. So developers and production companies always need talented creative pros who are skilled at 3D modeling, 2D or 3D animation, motion capture, digital illustration, and visual-effects creation.

Just think of the virtual wonders that you might get to create: animated characters, fantastical creatures, immersive scenery and environments, fascinating objects, and more. You might even get to develop storyboards for films or create the look and feel of entire video game levels. As you advance in your career, you may also get to direct and oversee the work of other artists or animators.

According to the Occupational Outlook Handbook (OOH), between 2016 and 2026 the number of available job openings for animators and multimedia artists in the U.S. could total 73,700, which includes nearly 6,200 new positions due to the sector's growth. Plus, the pay is often outstanding. For instance, in 2018, the average salary of these creative pros was $78,230. And art directors earned $104,590, on average.

Movies, TV shows, and videos are popular for a reason: They combine multiple art forms into singular works that are often greater than the sum of their parts. In fact, they have the power to engage our emotions at a deeper level than most other mediums. So they frequently provide some of our most shared, talked about, and remembered experiences. Plus, it is getting easier and easier to watch films and videos whenever and wherever we want.

All of that is why this sector keeps thriving. Data from comScore shows that in America alone, the top-grossing film of 2015 made over $652 million at the box office. And a PwC report predicts that revenue from filmed entertainment in the U.S. will grow by 4.4 percent a year on average, between 2018 and 2022.

The career possibilities are extensive. In addition to actors and screenwriters, other film and video pros such as producers, directors, editors, and camera operators are in healthy demand. Imagine making top-level business decisions (such as selecting scripts and hiring crews) as a film producer. Or imagine getting to oversee the whole creative process, including choosing actors, as a director. Even mid-level roles related to capturing or organizing digital footage are greatly enjoyed by skilled professionals in this sector.

The OOH predicts that during the decade that ends in 2026, 16,500 total job openings could become available for producers and directors. About 5,800 jobs could open up for film and video editors. And about 1,800 positions could open up for camera operators throughout the U.S.

Sound is powerful. It can enliven a person's mood, harken long-forgotten memories, create atmospheric vibes, and convey information in ways that bypass intellectual roadblocks. That's why music is such a universal language. It brings people together and creates high levels of joy.

Even with all of the changes brought about by the digital age, music is extremely popular. In fact, PwC predicts that on a global scale, total music revenue will keep growing thanks to the popularity of live music. And when it comes to recorded music, revenues from digital purchases and subscriptions continue to grow. In the U.S. alone, digital music revenues are projected to reach $9.3 billion in 2021. And by 2025, they could total more than $12.7 billion.

The result is that careers related to music and sound technology can be great options for people who have the drive and enthusiasm to succeed in this sector. For example, a lot of technicians, operators, and engineers are needed throughout the film, broadcasting, live events, and music production industries. So it's possible to build a fulfilling career that involves setting up audio equipment, making quality recordings, or mixing and editing music and sound.

According to the OOH, from 2016 to 2026, about 10,700 total job openings could become available for sound engineering technicians, broadcast technicians, and audio/video equipment technicians. Average yearly wages for these occupations ranged from $46,770 to $63,500 in 2018, says OES.

Electronic games are a huge part of the global entertainment landscape. And they only seem to get more popular every year. In fact, between 2015 and 2019, global revenues from video games are expected to increase by 5.7 percent per year, on average. That means the sector's revenues might total more than $93 billion by 2019. Those figures are from PwC.

For anyone trained in video game design, that spells opportunity. Designers in this sector often get to dream up the concepts, characters, narratives, environments, and gameplay features of new games. They help ensure that artists and programmers follow their plans. And some of them even contribute their own artistic talents or coding expertise to the projects that they work on.

It would be hard to overstate the importance of good photographic images in today's media-driven world. They often communicate information more powerfully than words, resulting in people feeling inspired to take action or change how they behave or think about a subject. Plus, the modern digital realm is increasingly driven by visual communication.

Professional photographers contribute their expert knowledge of lighting, composition, and other important aspects to all kinds of fun and interesting projects. And many of them specialize in a particular area such as commercial photography, portrait photography, photojournalism, aerial photography, scientific photography, or even fine art photography. The possibilities are extensive. 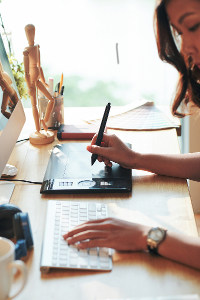 People with excellent programming skills are needed throughout the technology sector. But digital media frequently offers some of the most rewarding opportunities. After all, it's an expanding and interconnected world of games, information, apps, online communities, and so much more.

Did you know that comScore has found that mobile apps alone now drive well over half of all digital time that people spend? And everyone is aware of the massive importance of the Web in our modern lives. Even video games have become an everyday feature of many people's lifestyles.

As a result, web developers and application software developers are in very high demand. They contribute their coding and leadership skills to many types of projects, from e-commerce websites and social media platforms to mobile apps and high-end video games. In fact, between 2016 and 2026, the number of job openings that could become available for both types of developers in America could total about 326,900. That's according to the OOH.

Plus, the pay is typically quite high. For example, in 2018, web developers in the U.S. earned salaries of $75,580, on average. And application software developers earned average salaries of $108,080.

Graphic artists and designers work in almost every industry associated with the media arts—and in many other industries as well. They are experts at combining various visual elements into attractive and functional layouts. For any given project, they might create or work with typography, digital graphics, photographs, and illustrations.

The highest demand for graphic designers is within the field of web design and electronic media. When developers build or overhaul websites or mobile apps, they need the talents of designers who know how to give their layouts and user interfaces the visual touches that are necessary for good appeal, ease of use, and brand compliance.

That's why the employment of graphic designers within the field of web and digital development is expected to grow by 4 percent from 2016 to 2026. In total, about 11,100 graphic design jobs could open up during that timeframe.

Create Your Own Inspiring Future

The opportunities are out there. By developing your creative and technical talents, you'll have the chance to attain many of your highest aspirations. So discover the media arts schools that offer convenient programs online or in your region right now. Simply enter your current zip code into the following school finder to get started!