As new and exciting technologies arise in the music industry, training at music production and recording arts schools is becoming more and more crucial in order to be successful in this field. Producing audio in a studio is a complex endeavor that requires both technical and artistic skills. If you've already got an ear for music and sound, the only step left is to get the technical training needed to excel in this industry.

Earn your education and you can start looking forward to career opportunities like audio engineer, audio/video mixer, boom operator, music editor, radio producer, television production engineer, post-production editor, and sound designer. The people that fill these positions are the foundation of the audio industry and with the right training, you could be a part of that!

As a music producer, sound engineer, or other recording arts professional, you could be creating, recording, editing, mixing, or manipulating sounds of all types in order to create hit songs, electronic music, movie soundtracks, radio commercials, and more.

Take a look at the recording arts and audio production programs below and get in touch with the schools that intrigue you. Or, to quickly find the music production schools nearest to you, enter your zip code in the search box below!

What Does a Music Producer Do? 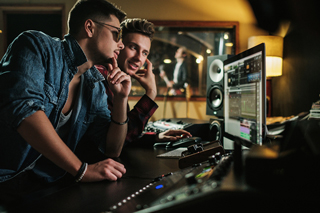 In the case of George Martin, he signed a little band called The Beatles and helped them destroy the perceived boundaries of what a rock and roll album should sound like. Butch Vig helped Kurt Cobain work through his doubts and insecurities and was a mentor to him during the recording of Nevermind (which is still a worldwide obsession today—more than 25 years since it first hit the shelves). Dr. Dre almost single-handedly created the West Coast rap genre and became instrumental in starting, maintaining, or bringing back the careers of such artists as 2Pac, Snoop Dogg, and Eminem.

And last, but certainly not least, Todd Rundgren helped to create Meatloaf's best-selling album Bat Out of Hell. (Many people would hate to think of a world where "Paradise By the Dashboard Light" didn't exist to belt out on long drives.)

In their simplest form, the typical job responsibilities in this field could be loosely classified as project management. Some of the specific duties can include:

Music producers also need to have musical abilities themselves. Like writers or painters, musicians can become too close to their art and "miss the obvious," so to speak. A music producer can bring a fresh perspective to a song and often makes tweaks to the arrangement or composition—which can make the difference between a mediocre song and a great song. They can even become involved in the songwriting process, since many artists finish existing songs or even write new songs in the studio.

The duties of a music producer can also include more technical jobs. They must be capable of working with various technologies, including:

Some recording studios have gone completely digital (rather than continuing to utilize some of the analog technologies listed above). A digital audio workstation (DAW) is basically one computer software package that has the ability to handle the combined tasks of mixing consoles, synthesizers, sound effects devices, and recorders. Popular DAWs include:

As you are probably beginning to see, there really is no standard, one-size-fits-all job description. The work responsibilities are vast, and determining the area of your strengths and interests can be a big help when it comes to deciding on training and pursuing job opportunities. 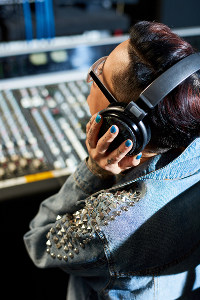 While there is no industry standard when it comes to the education needed for a career in this field, many schools offer programs related to music production and the music business in general.

Although many of today's top music producers have no formal education, the industry has continued to become more and more immersed in computer technology—resulting in a greater importance being placed on post-secondary education.

Certificate, diploma, and degree programs exist which can provide you with the skills required for being a music producer. In general, most programs cover:

Some programs can even provide you with training related to the business side of the music industry. This can include:

What It Takes to Be a Music Producer

As beneficial as a post-secondary education can be, becoming a pro takes more than a degree or diploma. Open positions can be few and far between, and the competition for these jobs is fierce.

Even after completing the necessary education, honing the ideal qualities, and gaining experience, it's important to note that the music industry is continually changing and evolving. Everything from new music genres to increasingly sophisticated technologies and equipment can pop up at a surprising speed. Therefore, learning how to become a music producer is a lifelong journey.

There is no set standard of length for training programs. It really depends on the type of program you choose. Online certificate programs can allow you to graduate within a few months, while a degree program can take from one to four years to complete. If you already have some experience and knowledge, and are simply looking to gain hands-on technical skills, a short-term, career-oriented program could be the right option for you. Or, if you are looking for an in-depth education that covers theoretical, technical, practical, and general business skills, a degree program might be a better fit.

Certification isn't required to legally work as a music producer in any state. However, if you want to join a professional association related to the music industry, there are various options available to you. The most common associations include:

These associations tend to be involved in the industry in various ways, including legal and business aspects such as copywriting, promotion, and sales, as well as the monitoring and review of state and federal policies, laws, and regulations. They also provide members with information, resources, and research related to the industry.

According to Occupational Employment Statistics program estimates from 2018, here's how much professionals in this field earned:

According to occupational projections from the Bureau of Labor Statistics, employment of sound engineering technicians is expected to grow by two percent over the decade between 2018 and 2028. Music producers could see a five-percent growth in job opportunities over the same timeframe.

However, there is another factor that has a large impact on the job outlook for music producers. That factor is competition. While opportunities are expected to become available at an average rate, the competition for these positions is forecasted as keen—meaning that a higher than average number of applicants are expected to compete for each available position.

Breaking into the Industry

Even though it can be challenging to find jobs in the music industry, there are factors that can heighten your chances of securing a position. Here are a few tips to consider:

Recording studios and production houses are the most common work environments. However, opportunities can also be found within settings such as radio and television studios, film companies, and more.

Alternate titles and similar occupations include:

Your ideal first step is to begin researching options for schools in your area. You can find a wide variety of programs listed above, or search by zip code to find the schools near you!