Ohio HVAC training can help you enter a satisfying and important trade in little time.

Imagine the future you can create for yourself by learning how to install, maintain, and repair heating and cooling systems. By entering this trade, you can benefit from a positive job outlook. Plus, HVAC pays well for workers with the right training. And what better place to learn how to be an HVAC technician than affordable Ohio?

It all adds up: For people who enjoy hands-on work, HVAC is a good career choice. After all, our need for clean air, safe refrigeration, and efficient temperature control will never go out of style. And thanks to a growing emphasis on minimizing the environmental impact of HVAC systems, you can also play a role in the movement toward more energy-efficient buildings.

With an education from an Ohio HVAC training program, this can all happen in less time than you might think. So why not take the next step? Just enter your zip code into the program finder below to see Ohio HVAC schools near you! 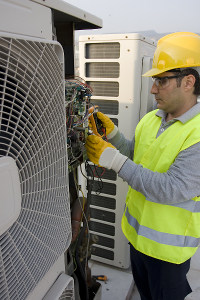 Ohio HVAC training schools can help you learn the hands-on skills required to install, maintain, and repair modern heating, cooling, and refrigeration systems. So if you're interested in pursuing this diverse career, keep reading to discover answers to four common questions.

1. How Can I Become an HVAC Technician?

In Ohio, you can work as an HVAC technician without a license as long as you are supervised by a licensed contractor.

To work independently as a contractor, you need to be licensed in the state. In order to acquire an Ohio license, you must:

As HVAC systems become more complex, employers look for an increasingly high level of theoretical knowledge. That's one reason why, although no specific schooling is required for HVAC work at the entry level, completing an HVAC program can increase your chances of finding a good job and passing the Section 608 certification exam. So for a trade school student, HVAC is a major that covers the basics of heating, cooling, and ventilation in order to open doors to working in this field. Some of the topics these programs may cover include:

Typically, a program at an HVAC school is anywhere between six and 24 months long. Depending on the program, you can earn a diploma, certificate, or associate degree. The tuition varies widely, so the cost of HVAC school is anywhere from $1,200 to $15,000. The cost of tuition is influenced by factors like whether supplies are included and what type of school you attend.

You can also become a good HVAC technician by completing an apprenticeship. An apprenticeship is a period of supervised work experience combined with classroom time. The Ohio Department of Job and Family Services administers apprenticeships.

With the right training, HVAC technicians make good money. The Bureau of Labor Statistics (BLS) says that workers in HVAC make $22.90 an hour in Ohio, on average, which equals about $47,640 a year.

Income levels reflect your qualifications and experience. During the training period, an HVAC apprentice makes $33,150, on average, in the U.S. In contrast, the top 10 percent of HVAC earners in Ohio make over $68,560, according to BLS data.

3. What Is the Job Outlook Like for HVAC Technicians in Ohio?

Across Ohio, workers who are trained to do HVAC jobs are in demand, with the number of job openings in the state expected to increase by 15 percent between 2016 and 2026. That's more than double the national average for all occupations, which is seven percent.

But people working in the industry predict that it will be difficult to fill all of those expected open positions. As an example, in a recent survey of Ohio construction firms, 92 percent of respondents said they were having a hard time filling craft positions. Due to the complexity of modern HVAC systems, employers look for workers who have had the kind of theoretical and hands-on education available at Ohio HVAC training schools.

4. Is Ohio a Good Place to Get HVAC Training?

In a word, yes. In fact, Ohio has been named the second-best state for HVAC workers in the country. Why does the Buckeye State place so high? Although Florida has the most HVAC jobs in the country, Ohio ranks higher for training and is home to more accredited HVAC programs than any other state. Ohio also earns good marks for its large number of HVAC wholesalers.

Of course, living in Ohio has many other benefits, including:

What Should I Do Next?

Now that you've gotten some answers, it's time to check out nearby Ohio HVAC schools. To find programs near you, just enter your zip code into the search tool below!