Trade Schools Home > Articles > What Do You Want to Be When You Grow Up?

What Do You Want to Be When You Grow Up? 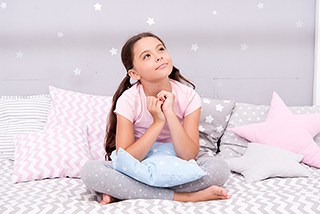 A rock star. An astronaut. A professional athlete. When you're a child, your career aspirations are the stuff dreams are made of. And whether you're passing notes to your best friend, sizing up the new kid at the next locker, or suiting up for the world's longest gym class, you're secure in the knowledge that when you grow up, you can be anything you want to be.

To explore the intriguing connection between childhood career aspirations and adults' chosen occupations, we surveyed over 2,000 people to discover what they wanted to be and what they do now. And to gain insights about today's kids, we also asked respondents what their own children want to be.

Do childhood ambitions really affect which occupations people choose as adults? How have kids' career dreams changed over time? Are people happy with what they turned out to be – or would they rather be optimistic kids again, telling their friends at recess that they'll be famous one day? Whoever you are and whatever you hoped you would be, this intriguing analysis will take you back to childhood – and just might spark your excitement about the future. 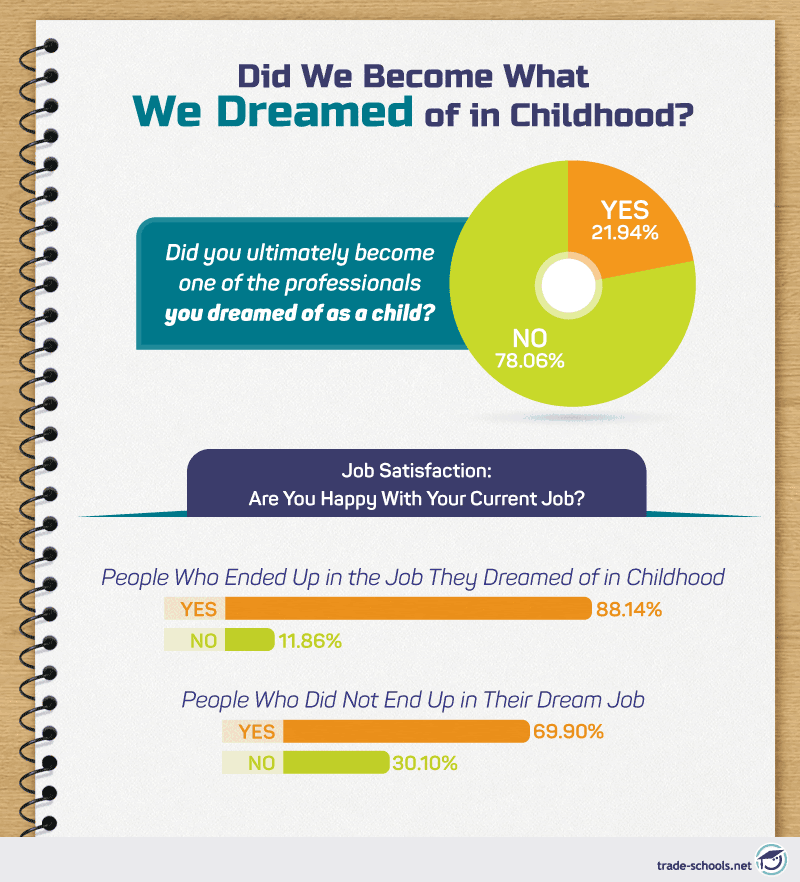 Well, it didn't happen exactly as you'd envisioned: You're not dancing on Broadway, collecting rock samples on the moon, or playing shortstop for the Yankees. The good news? You're not alone: Nearly 8 in 10 adults didn't realize their childhood career aspirations.

But it turns out that fulfilling a childhood dream really can make you happy. Among those who did pursue the career path they'd pictured in the early years, nearly 9 in 10 say they love their job. As for those who took a different route, only around 7 in 10 are satisfied with their amended goal.

(As we get older, many of us are no longer blinded by the glamor of our childhood aspirations. But we sometimes forget that all kinds of careers can make you happy. Every career sector—from healthcare to design to the skilled trades to technology—offers paths that can lead to a joyful and fulfilling professional life.) 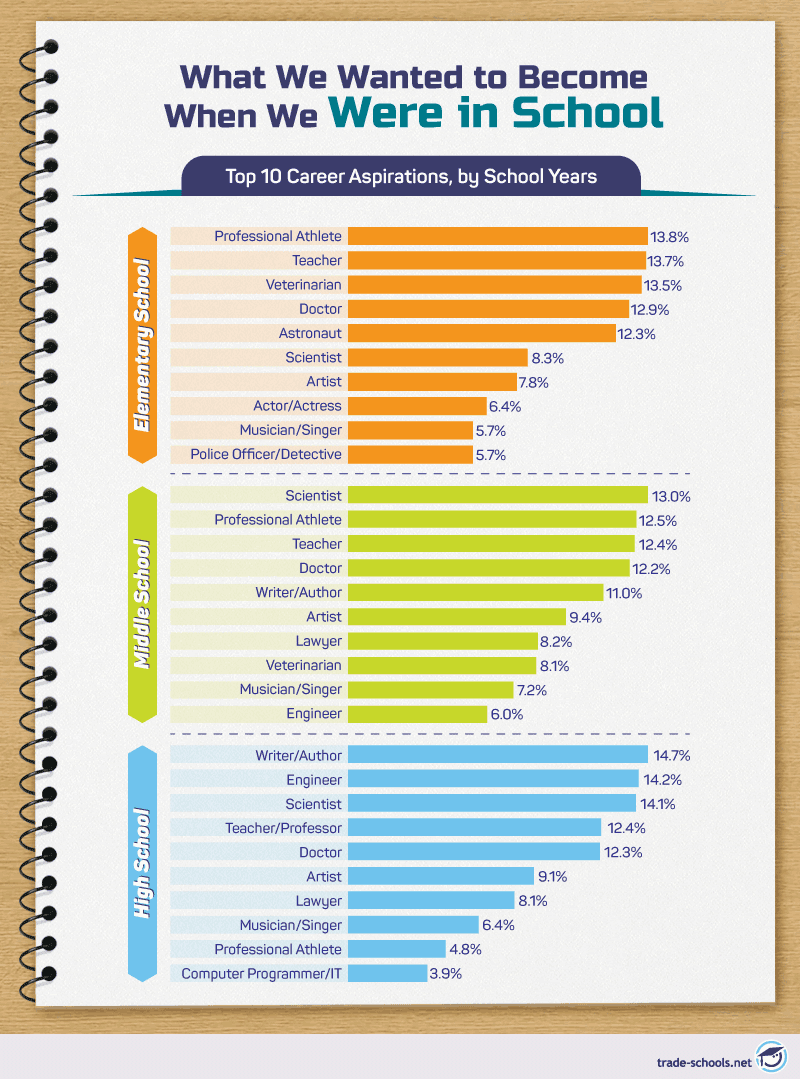 Our survey participants revealed that during elementary school, many of the most coveted careers – such as pro athlete, astronaut, actor/actress, and singer – trend more toward fantasy than reality. The odds of becoming an astronaut, for example, are astronomically slim: During a recent recruitment, NASA selected just eight candidates from 6,300 applications. Don't bet on becoming a pro athlete either. Only about 3 in 10,000 male high school senior basketball players will make it to the NBA, and only 1 in 5,000 female high school senior players will make it to the WNBA.

But as kids grow up, they do begin to realize they may not necessarily be the next Cristiano Ronaldo, Justin Bieber, or Angelina Jolie. In middle school, the focus shifts to more realistic (and admittedly less glamorous) careers. Scientist skyrockets to the top choice, and careers in writing, the legal field, and engineering begin to sound appealing.

By high school, the pro athlete ambition plummets to the bottom of the list, and the majority of the most coveted jobs are realistic options: writer, engineer, scientist, teacher, and doctor. And for the first time, computer programmer cracks the top 10 list. 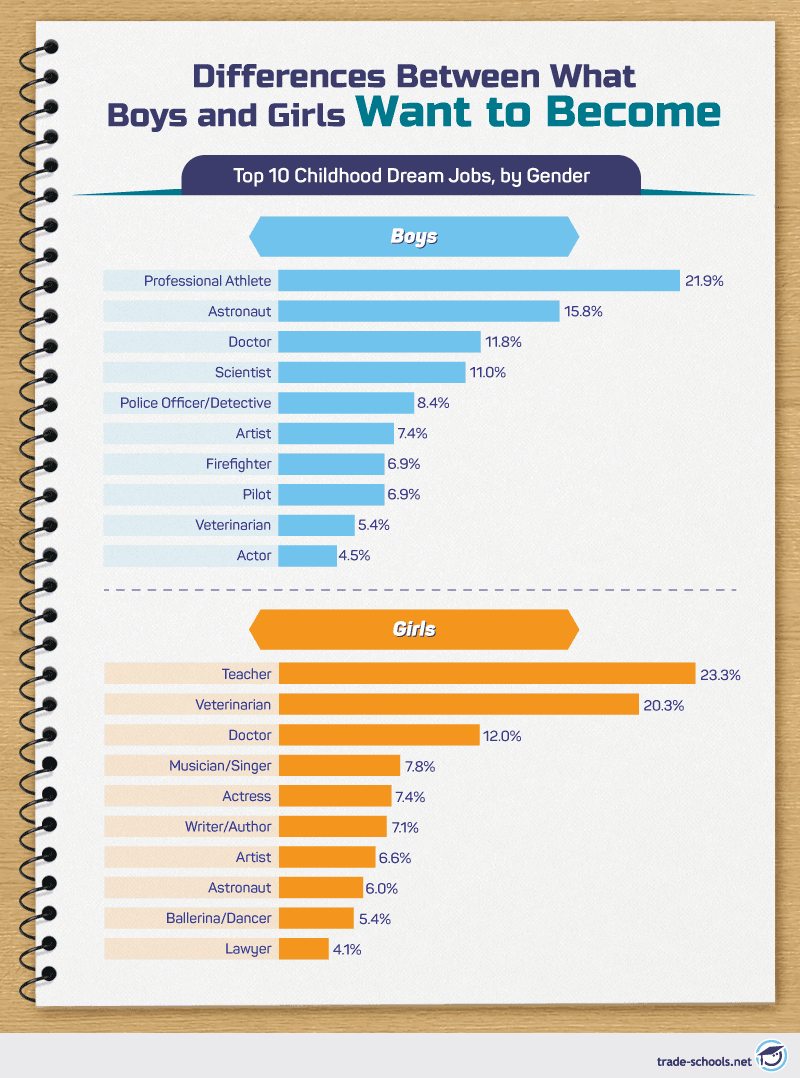 When it comes to future job aspirations, it appears boys crave careers that present adventure and physical challenges. Along with the inescapable dream of being a sports star, young boys daydream about careers as police officers/detectives, firefighters, and pilots. STEM careers beckon, too, as boys express interest in becoming doctors, scientists, and veterinarians.

What about girls' professional aspirations? Forget the longing to be a princess – today's girls are taking names and kicking aside gender-equality roadblocks as they ponder careers in STEM fields, the arts, and more. Just like their male counterparts, girls dream of becoming veterinarians, doctors, actors, artists, and astronauts. However, their No. 1 career choice is teaching – which didn't make the list for boys. Girls also appear to prize creativity over adventure, as they envision becoming musicians, writers, and dancers.

What sparks these career aspirations? Along with personality traits and interests, it appears social factors including parents' occupations can shape children's futures. A recent study by the London School of Economics and Political Science revealed that girls whose mothers hold jobs that aren't traditionally "female occupations" are apt to follow in their footsteps. But for boys, having a father in a traditional "male occupation" increases the likelihood of seeking traditionally male jobs.

The surprising result? People who aspire as children to hold a traditionally male or female job – such as a boy who longs to be a firefighter or a girl who wants to be a hairdresser – are actually twice as likely to pursue these types of positions as adults. 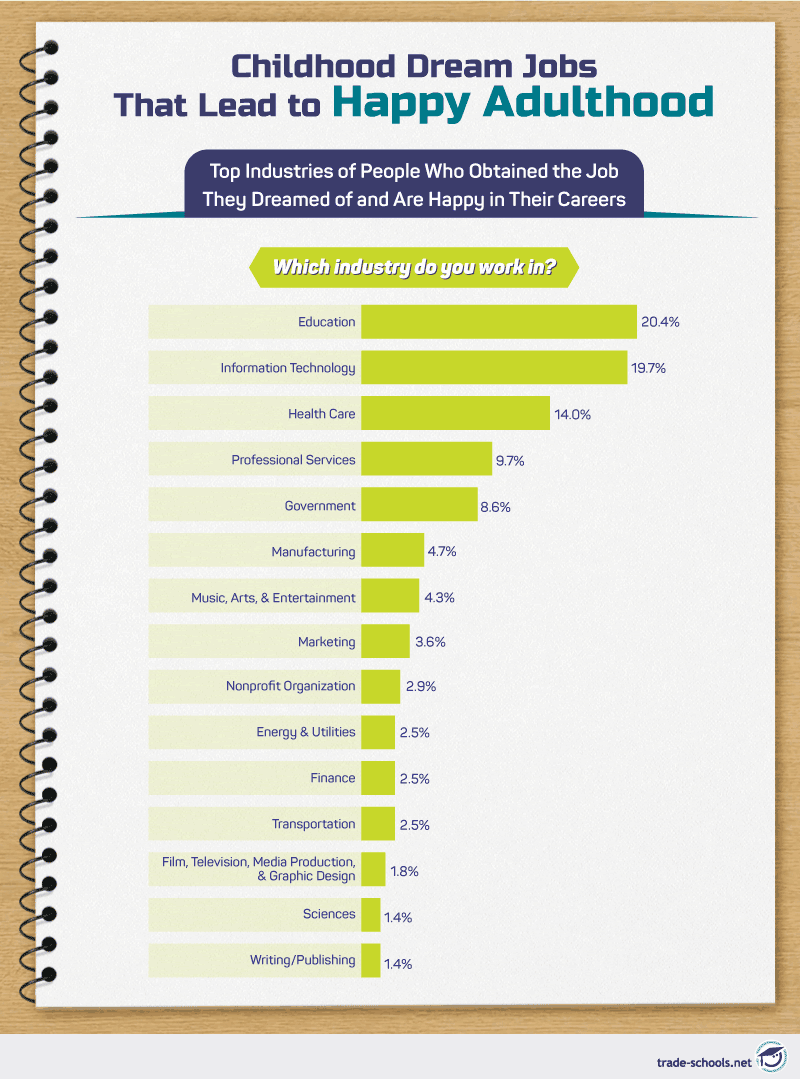 As mentioned above, around one-fifth of people actually do transform their childhood career fantasies into reality when they enter the job force. Among the people who realized their dreams and are happy in their positions, which industries dominate? Around 20 percent of people are in the education field, while just under 20 percent hold jobs in IT. Healthcare, professional services, and government round out the top five.

The 2015 National Society of High School Scholars Millennial Career Survey revealed that when it comes to employment preferences, today's students and young professionals share some similarities with our respondents – but also some differences. One major disparity: Though the education field topped our list, it didn't make the cut for today's millennials.

Instead, 40 percent of young people today anticipate careers in health care (especially women), 28 percent in science, and 21 percent in technology/engineering. Another 20 percent were intrigued at the possibility of an arts/entertainment/media gig or a business/administration/corporate career. 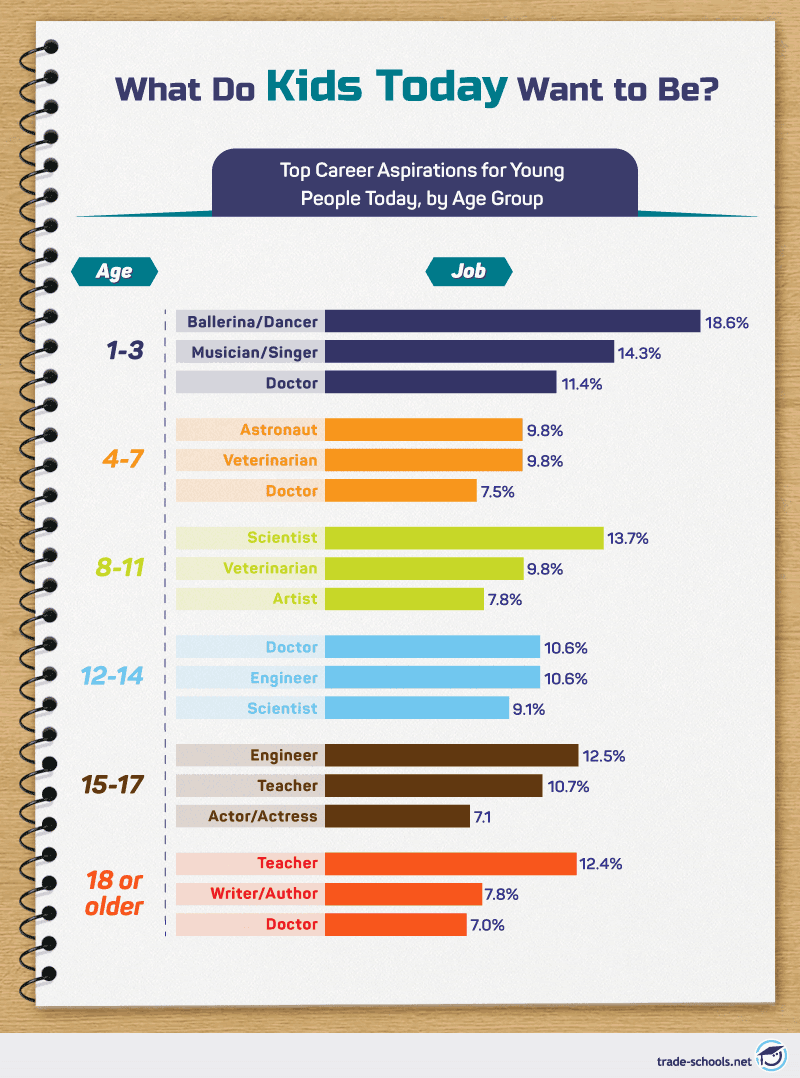 Next, our survey participants shared the future career goals of their own children. Today's tutu-clad, microphone-toting toddlers daydream about becoming ballerinas and singers. However, kids aged 1 to 7 also want to be doctors – perhaps partly fueled by Disney's popular animated show Doc McStuffins, which chronicles the adventures of a 6-year-old African-American girl who plans to become a doctor like her mother.

As kids get older, reality begins to play a larger role. Dreams of dancing, singing, and exploring outer space give way to plans to become veterinarians, scientists, artists, and engineers. By the time kids reach their late teens, the top career goals are teaching, writing, and practicing medicine.

Childhood Career Aspirations: Past and Present 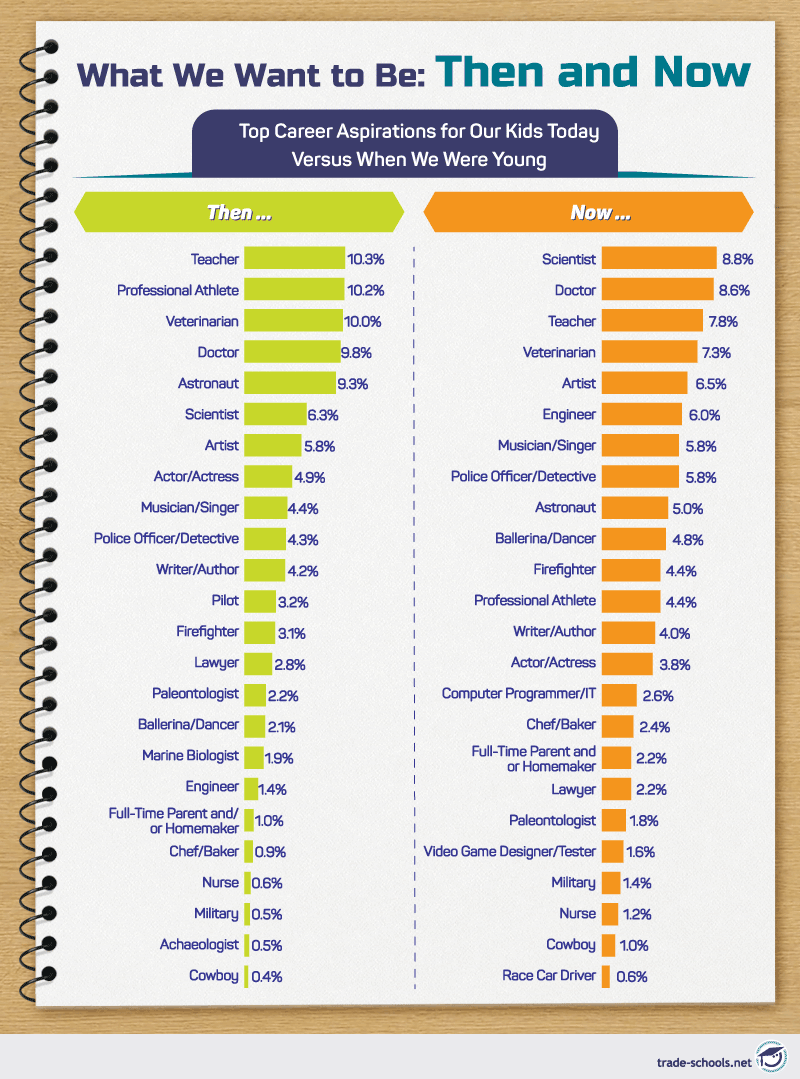 What did you want to be as a child? Today's kids have some similar goals — but some very different ones too. When you were younger, most kids dreamed of becoming teachers, pro athletes, veterinarians, doctors, and astronauts. Children now are most likely to envision careers as scientists, doctors, teachers, veterinarians, and artists. One major difference: Today's tech-savvy kids aspire to careers that you may not have envisioned in your wildest dreams, like computer programmer and video game designer or tester.

Some things never change: The old pipe dreams of becoming pro athletes, cowboys, astronauts, actors/actresses, and musicians still ring true. However, today's kids may be slightly more realistic: The occupation option of pro athlete – the second-most-popular career choice in the old days – has dropped to 12th place today. Additionally, it appears today's kids also have a need for speed, based on one fantasy-driven addition to the list: race car driver. 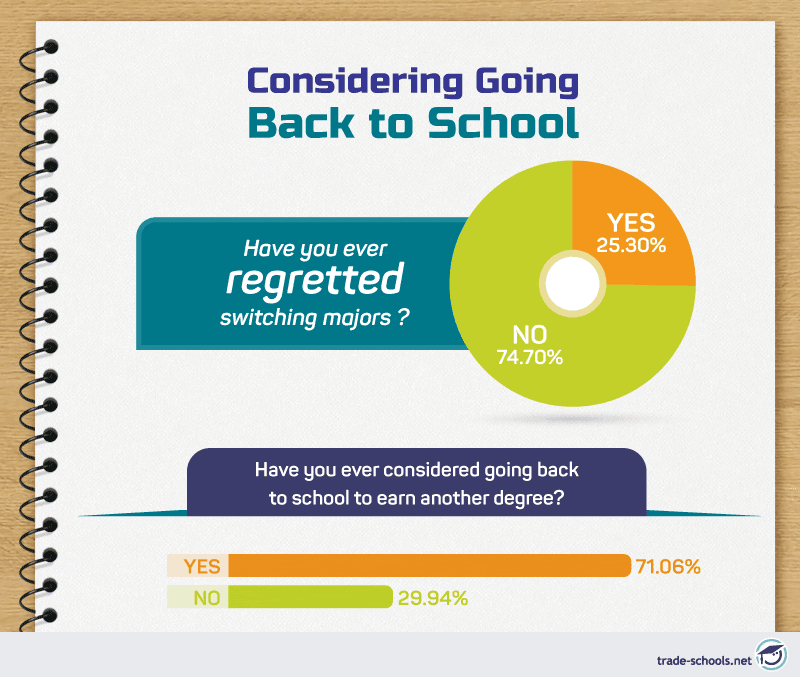 At some point between childhood and adulthood, many people second-guess their chosen career paths and decide to change majors during college. In hindsight, was it a smart move or a tactical error? Three-quarters of our respondents don't regret the decision to switch majors. That said, 7 in 10 people who changed their focus have thought about returning to school for another degree.

For today's adults, juggling the responsibilities of work and home can be tough enough without adding school to the mix. However, for people who require flexible schedules and the option to get a degree from home, there are numerous options for online programs. Online trade schools, technical schools, colleges, and universities all offer numerous training options for careers in virtually any industry — from healthcare to business, skilled trades to computers and technology.

Let's face it: You may never become an astronaut, a rock star, or a pro athlete. But based on the insights we gleaned from our survey, the odds are good you can still enjoy a fulfilling career. Our respondents report high levels of job happiness, dream job or not.

What do kids want to be when they grow up? Their career goals evolve as they age – from sports star to scientist to writer/author. Overall, boys tend to set their sights on jobs that offer physical challenges, while girls are more interested in the arts. Among those who pursued their childhood dreams, careers in education, health care, and IT score high marks for job satisfaction.

In the old days, kids wanted to be teachers or pro athletes, but today's kids have their sights set on becoming scientists and doctors. They're also tech-savvier than prior generations, so dreams of a career in IT and video game design are more realistic than ever.

If you're at a career crossroads, reflecting on your childhood dreams can offer unique insights. During childhood, you were your truest, most uncensored self – before bills, kids, and other responsibilities came into play. If money were no object, what would you want to be?

You can spark a career revolution by recapturing the wonder and excitement of childhood – and channeling your younger self's passions, talents, and interests. Whether you want to chart a new path or jump-start your current career, at www.trade-schools.net, you'll discover everything you need to find the school and program for your needs. What do you want to be when you grow up? The answer may be just a few clicks away.

We surveyed 2,136 respondents about what career aspirations they had as children. We also surveyed parents to find out what their children today want to become in the future.

We grant permission to use the images found on this page freely. When doing so, we ask that you kindly attribute the creators by linking to this page so your readers can learn more about the project and its methodology.