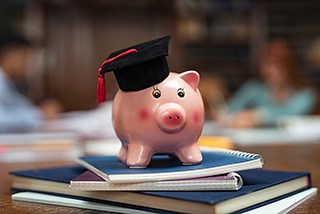 The average household in America owes more than $90,000 in debt.

Between credit cards, student loans, and car payments, these bills add up quickly. Considering the median household income in the U.S. is around $56,000, household debt is almost twice the amount of household earnings.

In order to understand the landscape of debt in America, we polled 2,000 people and asked them how and when they learned about finance, and how often they live paycheck to paycheck. Continue reading to see the financial state of our nation.

There comes a time when you finally realize paying with a credit card isn't the same as paying with cash. Deciding when to pay outright for something versus financing—or financing over time—is a big part of financial adulthood.

We asked our survey respondents where they learned about finance. Overwhelmingly, over 43 percent said they learned from their parents while growing up. Whether you're first learning that "money doesn't grow on trees" or they're helping you apply for your first credit card, parents are an integral part of how well we understand finance... and debt.

For nearly 17 percent of respondents, that lesson only came after enduring financial hardship. Maybe they struggled for the first time making a car payment or got behind on a credit card. Unfortunately, having to worry about money is a lesson all on its own.

For others, their financial lesson came from school. Almost 15 percent said they learned finance in college, while around 12 percent learned about it in high school and about 4 percent picked it up in middle school.

Learning and Living in Debt 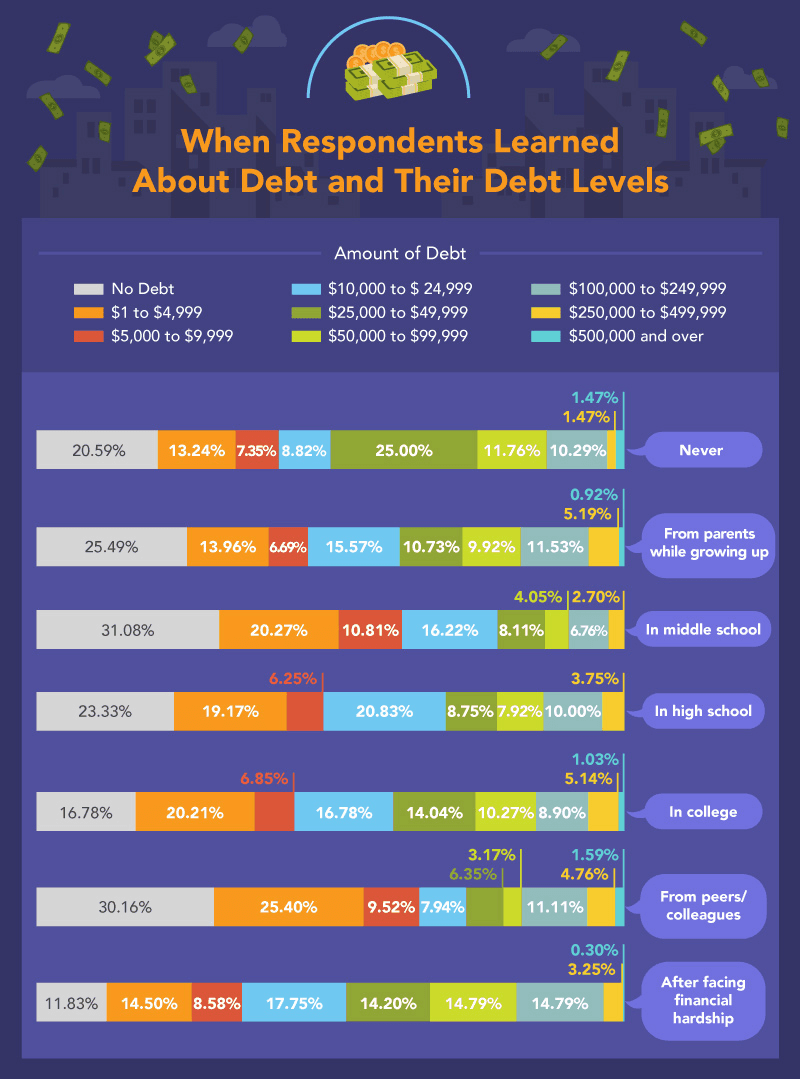 Survey respondents who picked up their debt lessons from peers and colleagues were also more likely to report lower levels of debt, with just over 30 percent owing nothing at all.

Unfortunately, for some, the lessons came too late. For those who learned about debt after facing personal financial hardship, they were the most likely to report having between $100,000 and $249,000 in debt. Not learning the ins and outs of financial responsibility in time can have significant repercussions when trying to figure out how to pay that money back.

Financial education can have its growing pains. Sometimes, lessons around saving money and making a budget can come too late. Most survey participants told us they wish they knew more about growing their income.

Considering less than 63 percent of Americans don't have enough money in savings to cover a $500 emergency at any given time—while many people live paycheck to paycheck—learned lessons about saving and investing could help alleviate unnecessary stress. The burden of living paycheck to paycheck can mean having enough money to cover bills and immediate needs, but not enough to put additional money aside for long-term investments, like retirement or buying a home. By better understanding personal finance rules like budgeting and growing your income, you may be able to avoid the harsher lessons brought on by debt.

A sound understanding of good financial habits helps create financial stability that can last for years to come.

Debt—whether from student loans or credit cards—is no laughing matter. Depending on how well you understand finance, you may find yourself in certain financial debt without fully realizing how it happened.

Regardless of when you learn about financial security or where those lessons come from, the most important thing is that you understand how money really works. From debt and interest rates to the stock market and investing, your financial education can be the difference between earning enough to live comfortably (and saving a little on the side) and being forced to live paycheck to paycheck to cover life's expenses.

At Trade-schools.net you can explore budget-friendly opportunities to continue your education and find the programs that will teach you about some aspects of finance you may feel you missed out on.

While most Americans live in some form of debt, you can still take steps today to secure your financial future. Learning how to budget appropriately, save in addition to paying bills and costs, and investing savings can create financial stability that pays you back in money and peace of mind. You can't put a price on that.

We surveyed 2,000 people in the U.S. to find out how they learned about personal finance, how prepared they were for their current financial situation, and their current debt levels to explore how finance education may lead to less debt and financial struggles.

Financial education is important, so please share our content with your readers for noncommercial purposes only. Just give our authors proper credit.