The Price of Academic Admission

You're a high school senior, about to graduate and go away to college. It's time to pick a major. Should you be a nurse? A doctor? An artist or designer? An accountant? Or is going to beauty school or into the skilled trades a better route for you?

There are a lot of factors that go into these choices, and cost is one of them. But did you know it's not just the school you enroll in that dictates how much your education will cost? Books, trips, classroom tools... they all factor into the price of education.

So, which majors cost the most and which are a bargain? We went to the data to find out. 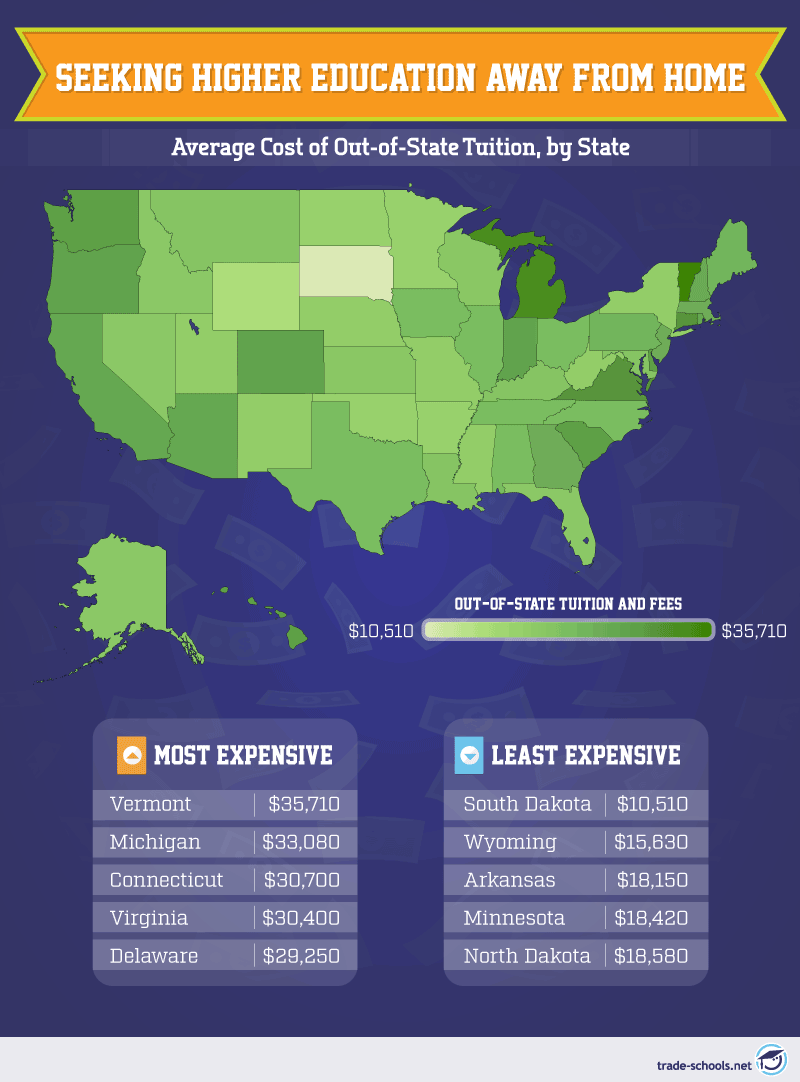 Let's start by talking about tuition costs. We looked at the average annual out-of-state tuition across the U.S.

The most expensive places to get your education? Vermont, Michigan, Connecticut, Virginia, and Delaware. Perhaps this is because these states are home to schools like the University of Michigan, which has an out-of-state tuition that rivals Harvard's. Or perhaps the higher general cost of living in states like Connecticut (ranked No. 7 most expensive state in the nation) factors in. Either way, an education from these states costs more on average than anywhere else in America.

As for the cheapest states to get your degree? South Dakota, Wyoming, Arkansas, Minnesota, and North Dakota lead the affordable pack. 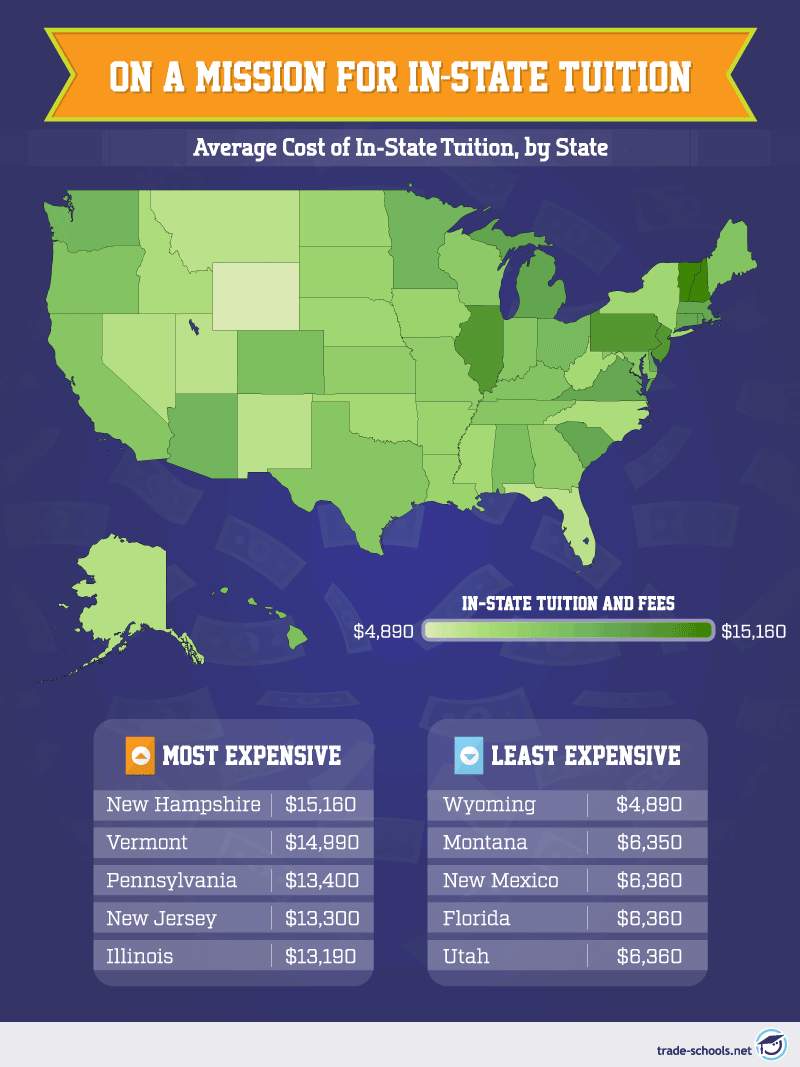 The good news is that a low price tag doesn't mean a low-quality education. The University of Wyoming charges in-state students less than $5,000 a year, according to U.S. News and World Report; it also boasts small class sizes, is popular for nursing students, and ranks in the top 200 colleges and universities in the entire U.S. Even better, the University of Florida ranks in U.S. News and World Report's top 50 universities just over $6,000 a year for in-state students. 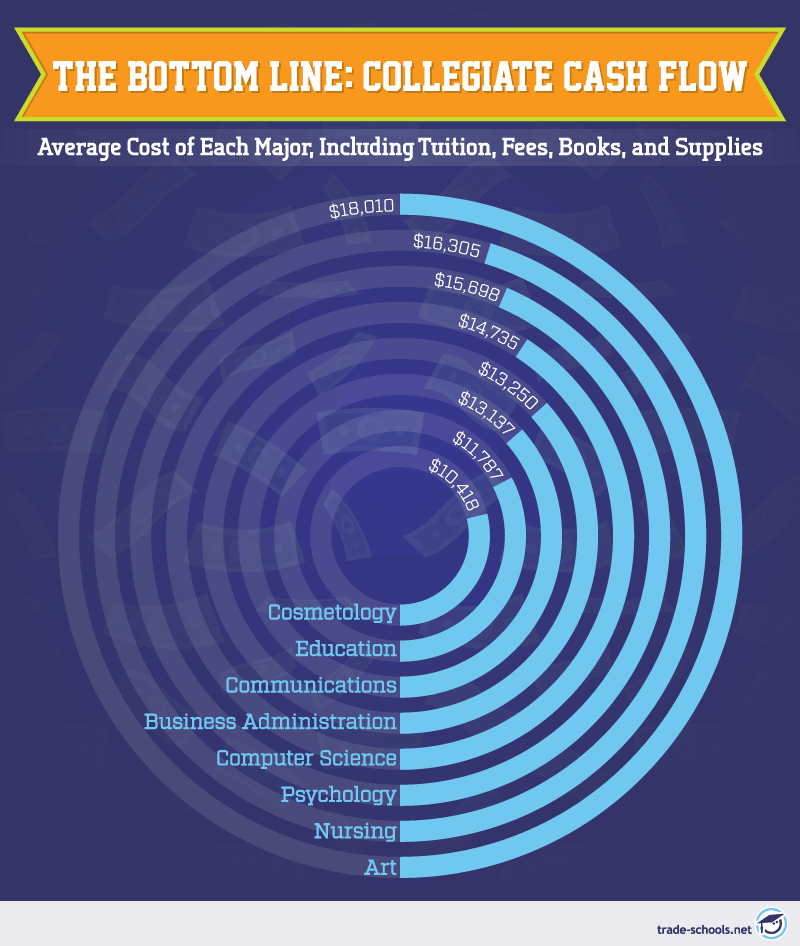 Tuition isn't the only thing to think about when calculating your education budget. Some degrees require more tools (and therefore cost more). When we compare the cost of not only tuition but also books, and tools, we get a more complete picture of the overall annual cost each degree brings with it.

According to our research, cosmetology school is a good bet; it costs around $10,000 annually. Once you're in the profession, the average hourly wage is $11.40 (about $23,710 per year), plus tips, but plenty of stylists report making more, especially at salons that pay in commissions instead of salary.

Education, communications, and business administration degrees also come at lower prices. However, technical professions such as nursing will cost you a pretty penny. The good news is that according to the Bureau of Labor Statistics, nurses averaged $67,000 per year in 2015. 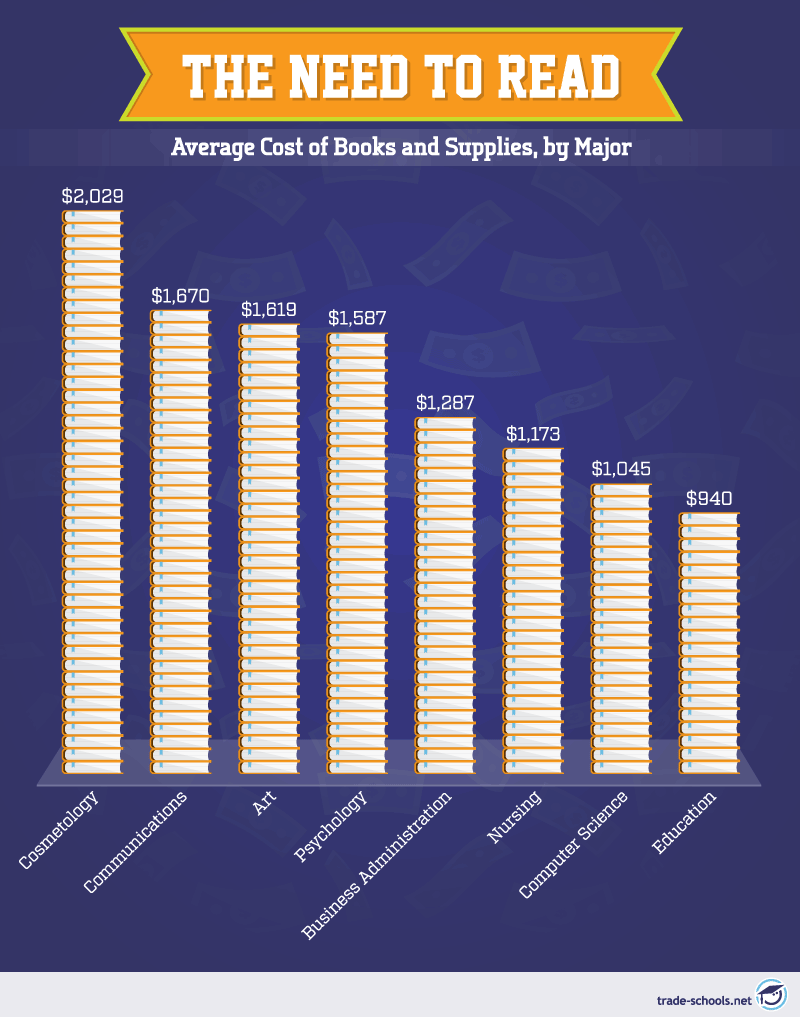 All college students need some books and supplies. But which majors really rack up a bill at the bookstore and the supply shops, and which majors are less hands-on?

Cosmetologists, communications majors, and artists are the biggest book and supply spenders, all tallying over $1,600 in books and supplies alone. Education and computer science majors are at the other end of the spectrum, spending significantly less on books and supplies over the course of their education. 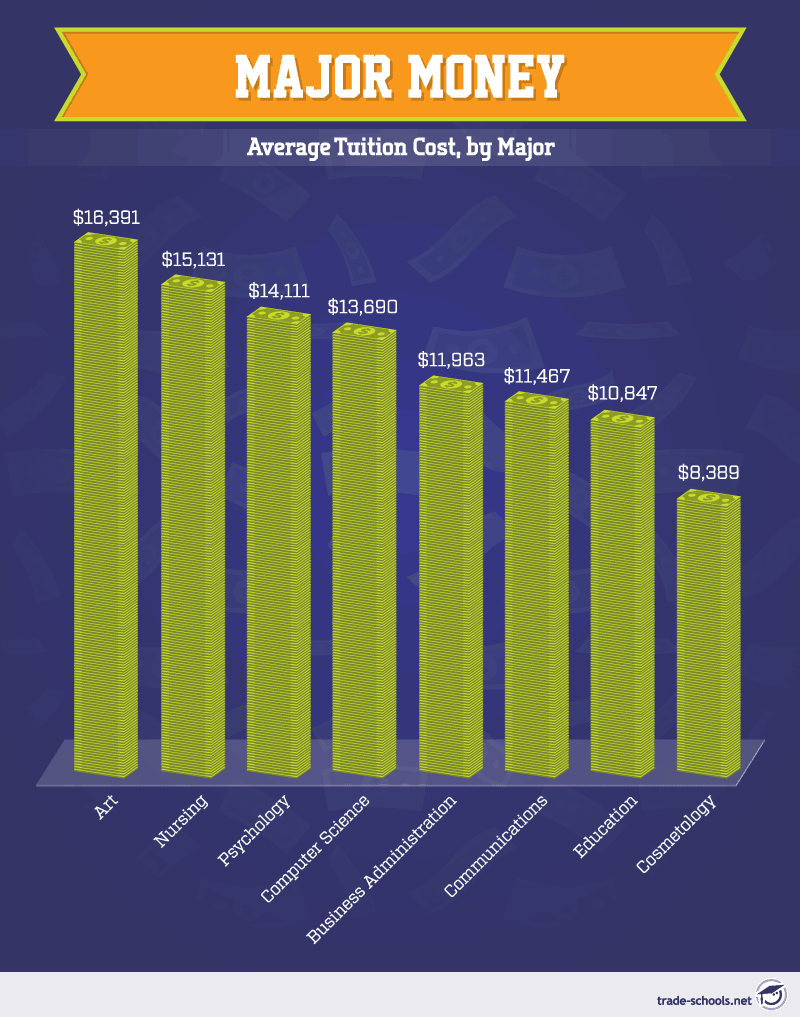 Majors also impact tuition itself. The costliest tuition? An art degree, with an average of over $16,000 per year—a figure that feels disproportionate when you consider that the annual artist salary (according to the BLS) is around $45,000 per year. Additionally, recent graduates of fine arts programs have a 7.6% unemployment rate, which is well above the national average of 4.9%. 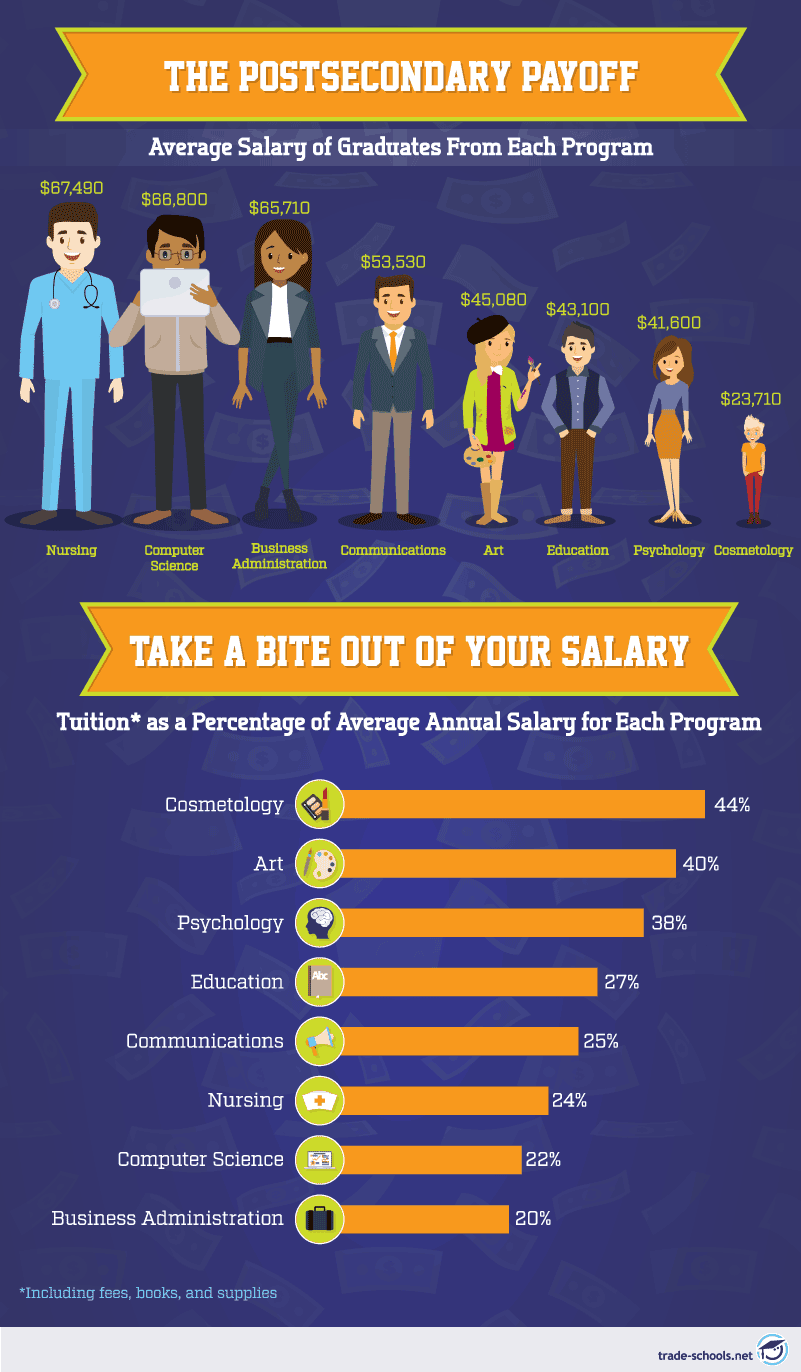 Many majors with a higher price tag also lead to professions boasting higher average salaries. Nurses and computer science professionals can expect upward of $65,000 a year.

On the other end of the spectrum, cosmetologists pay less for their education but can also expect smaller salaries on average. But keep in mind, those figures are often skewed by the fact that many professionals don't report their tips—and those tips add up.

So how do those average salaries actually measure up to tuition? We calculated the tuition-to-salary ratio and those getting the most bang for their buck are business administration and computer science professionals, followed closely by nursing and communications.

When it comes to the cost of your education, it isn't just about which school you choose. Your major can make a major difference in your cost and how quickly you can recover from any student loans once you're in the workforce. It's important to factor those figures in when you're choosing what to pursue.

At the end of the semester, majors are what you make of them. Some writers make minimum wage. Others live in castles. Some business administrators work in tiny offices with modest wages, others go on to upper management roles or start their own businesses.

The important thing is to be prepared for the cost, save for college, and have a plan for your future.

We scraped course catalogs for public schools with over 20,000 students to determine the total annual cost of books and other materials needed to graduate with a degree or certification in each area of study.