All publicity might be good publicity for certain industries, but for higher education, bad press can leave a major stain on campus, which can sway potential applicants. While scandals happen every day, it's usually the ones happening on college campuses that receive the most media attention. Once on the internet, these stories spread like wildfire—even if the facts aren't necessarily verified. For colleges, the effects of controversial articles can linger for many years.

To understand just how much influence the press has on the overall image of significant universities across the U.S., we searched for the top 100 news articles associated with each one. We then analyzed the text and performed a sentiment analysis, which measures how positive and objective the press coverage is. Looking at all the words used in each of these articles, we were able to paint a pretty accurate picture about the scrutiny colleges are subjected to by the media. Read on to learn more about what we found.

The first thing we looked at were the overall sentiment ratings for the top colleges across the U.S. To do so, we utilized a Python script called TextBlob, which measures the adjectives found in text and awards each a subjectivity and polarity value based on the intensity of the adjective used. The sentiment (or polarity) analysis above is based on a score from -1 to 1 (or positive to negative). It turned out that all of the colleges we reviewed had sentiment scores above 0, meaning that news articles were not too critical toward them. However, Montana State University had, by far, the most positive press coverage. Its score was about 0.20. Binghamton University, Baylor University, and Seton Hall University also had pretty positive scores (0.15 each).

While still pretty favorable, the University of Oklahoma and Louisiana State University had the lowest sentiment scores—just under 0.06 each. Unfortunately, coverage of Oklahoma's chapter of Sigma Alpha Epsilon may have played a part in lowering the score. In March 2015, members of the fraternity were caught on video singing a racist song. But what about football? LSU's budget crisis may be skewing the school's results. 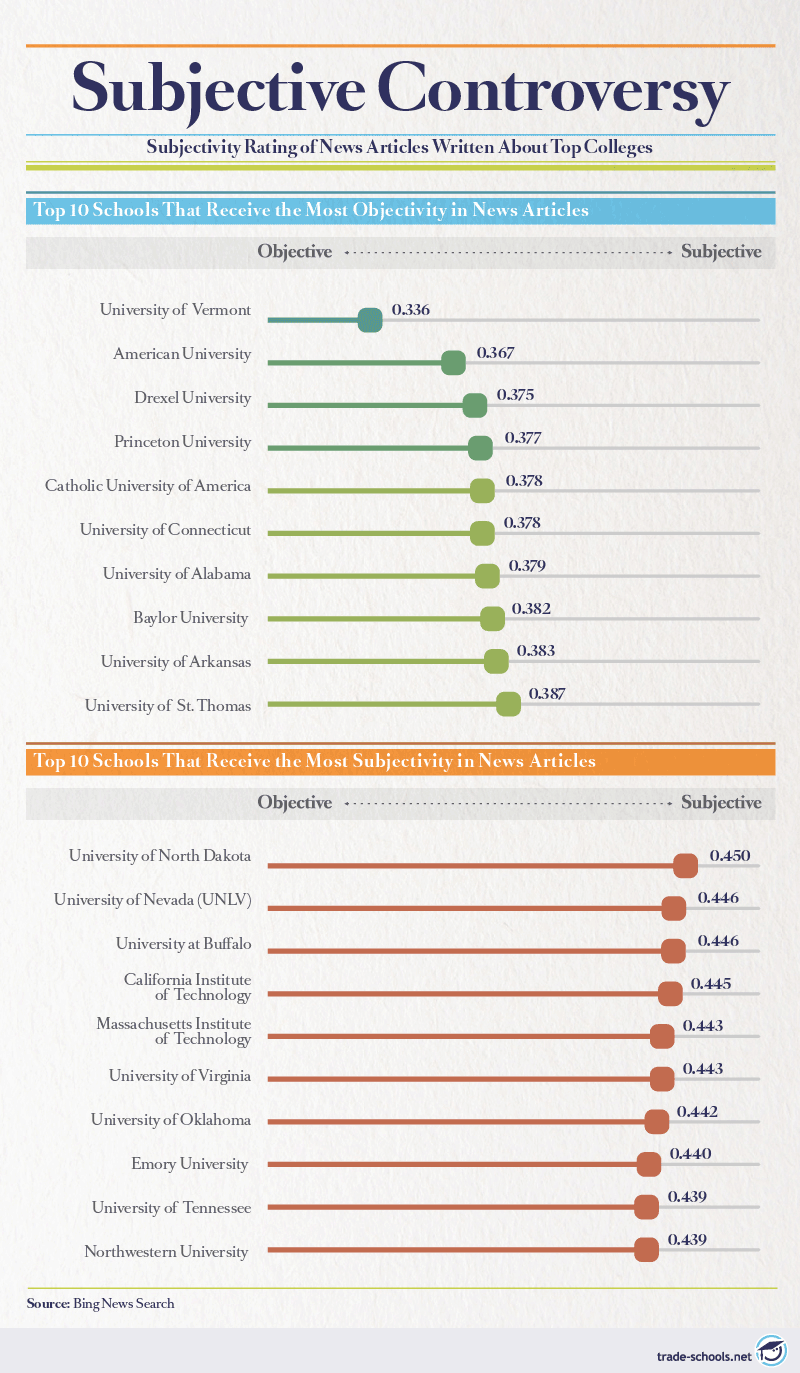 It's true that the press isn't always as objective as it should be. In a digital news environment, impartiality doesn't hold the same power as it used to. But how does that affect coverage of top colleges? Using our TextBlob analysis once again, we were able to compile a list of schools that had the most and least objective news coverage. The University of Vermont received the most objectivity in news articles regarding balanced text—about 0.34. At the same time, American University received a score of nearly 0.37, meaning its coverage was slightly more subjective.

On the other end of the spectrum, though, is the University of North Dakota, which had the most subjective news coverage. Its score was 0.45. Even the University of Oklahoma appeared to have very subjective news coverage (0.44). Interestingly, this unbalanced coverage could be the reason why it also had such a low sentiment score. Finally, Northwestern University was last on the list for the top 10 schools that received the most subjectivity in news articles. 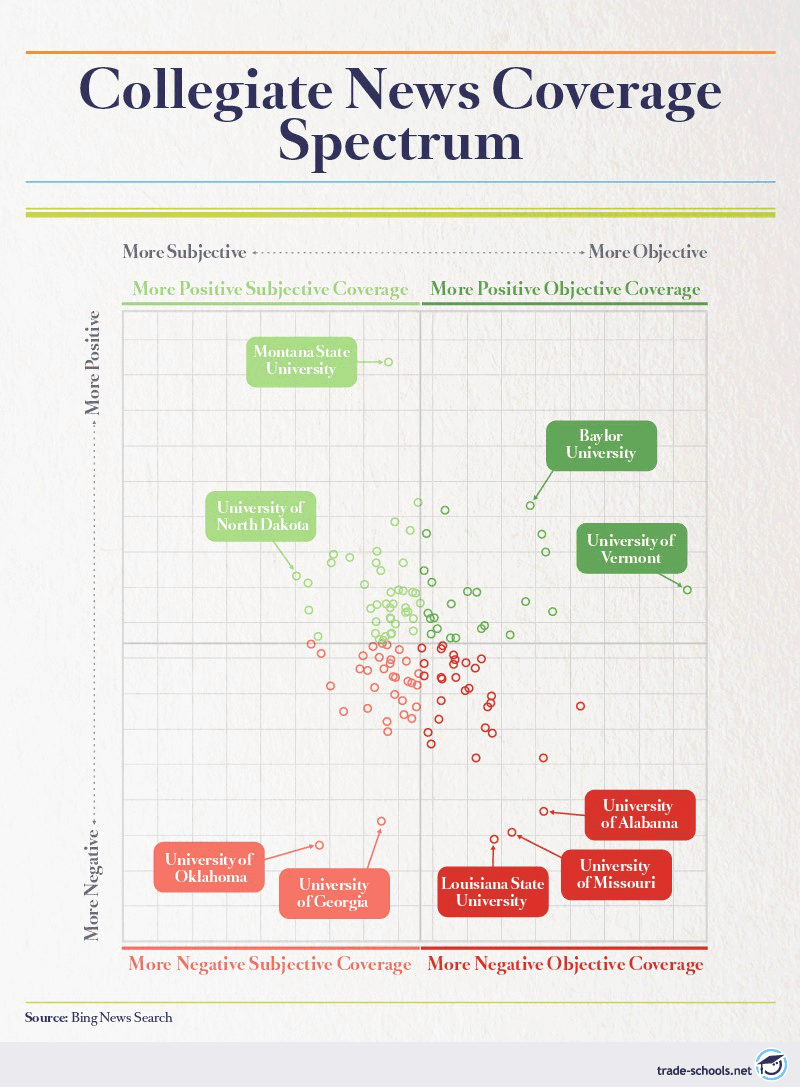 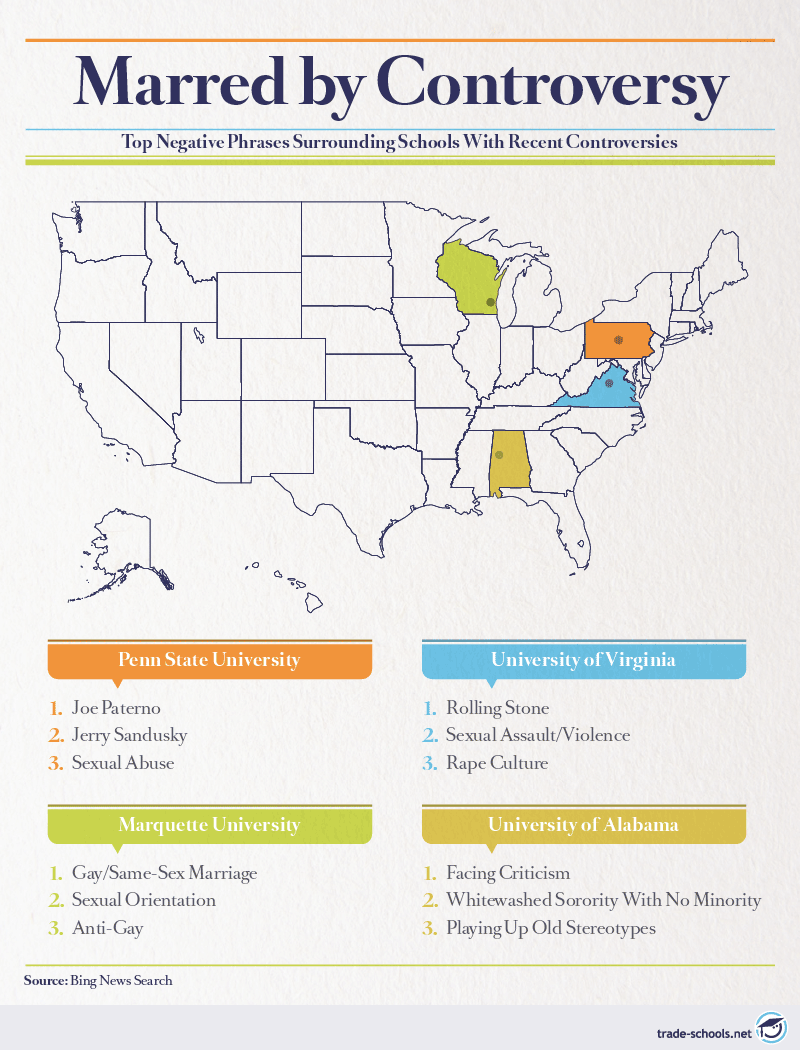 Even the biggest universities are not immune to the shadows that are cast by scandals or bad events. Unfortunately, when that happens, it can be hard to remember all the benefits provided by higher education. The next thing we looked at were the top negative phrases surrounding schools with recent controversies. As it turns out, everything we found related back to the actions of faculty and students. In 2011, Penn State had a very public sexual abuse scandal involving former football assistant coach Jerry Sandusky. Joe Paterno, the football coach, was fired four days after Sandusky's arrest.

When it came to Marquette University, coverage focused on a political science professor who was suspended in 2014 after he wrote a controversial blog post about same-sex marriage. Additionally, for months, the media revolved around a now-recanted article by Rolling Stone that claimed a student had been sexually assaulted at a fraternity house on the University of Virginia campus. While the reported victim was later found to have fabricated the story, UVA has yet to recover fully from the backlash.

Even the University of Alabama faced criticism by the press when one of its sororities (Alpha Phi) released a recruitment video that many contended objectified women and seemed whitewashed. As shown, sometimes bad publicity never goes away. 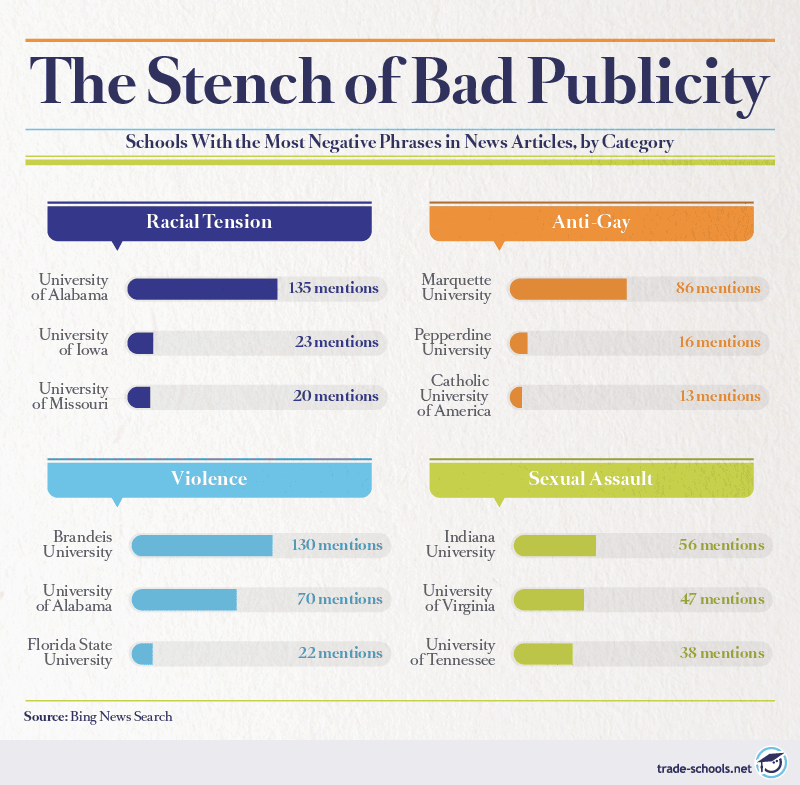 Next, we analyzed the top negative phrases associated with each college by category. Regarding race, the University of Alabama had an overwhelmingly large number of negative racial mentions—with 135 callouts, these mentions probably had something to do with its Alpha Phi sorority. And while the University of Iowa and University of Missouri also made this list, their mentions looked minuscule in comparison. Marquette University was linked to 86 anti-gay phrases, while Brandeis University had the most violence-related phrases (130). When two police officers were killed, a junior at the college tweeted that she had "no sympathy" for the officers.

Interestingly, Indiana University was linked more to sexual assault than the University of Virginia—they had 56 and 47 mentions, respectively. In 2015, a fraternity at Indiana was investigated and its members evicted after a vulgar video was released showing a member in an intimate position with a dancer. 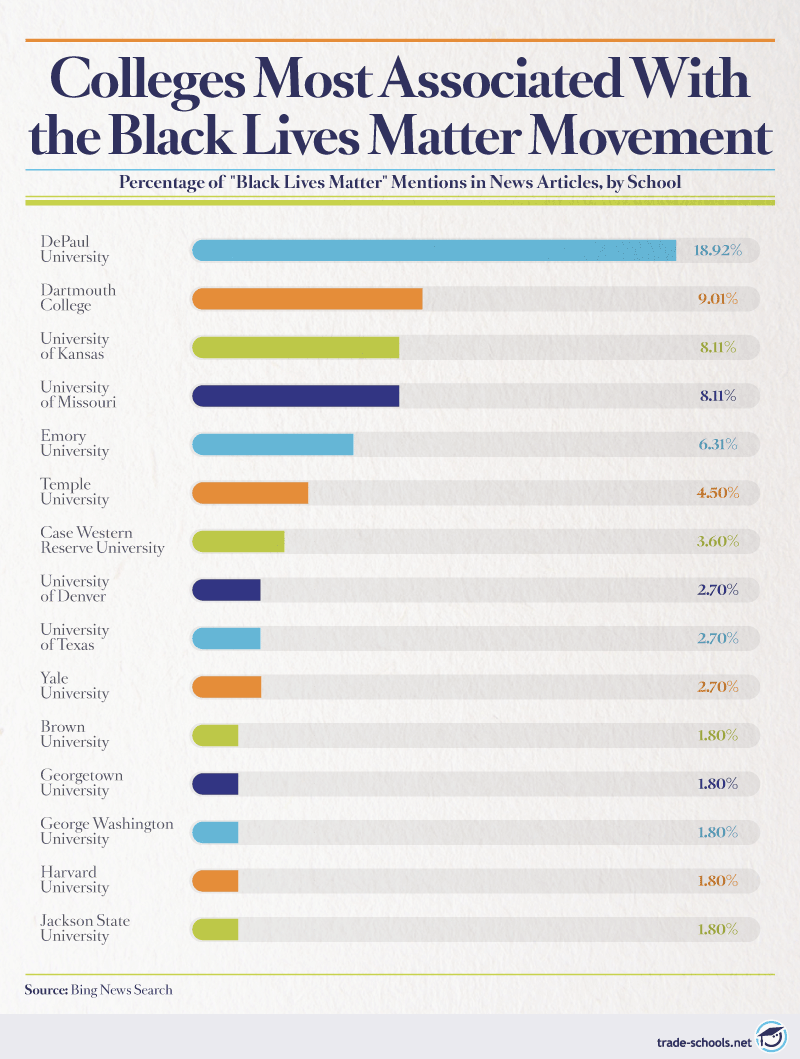 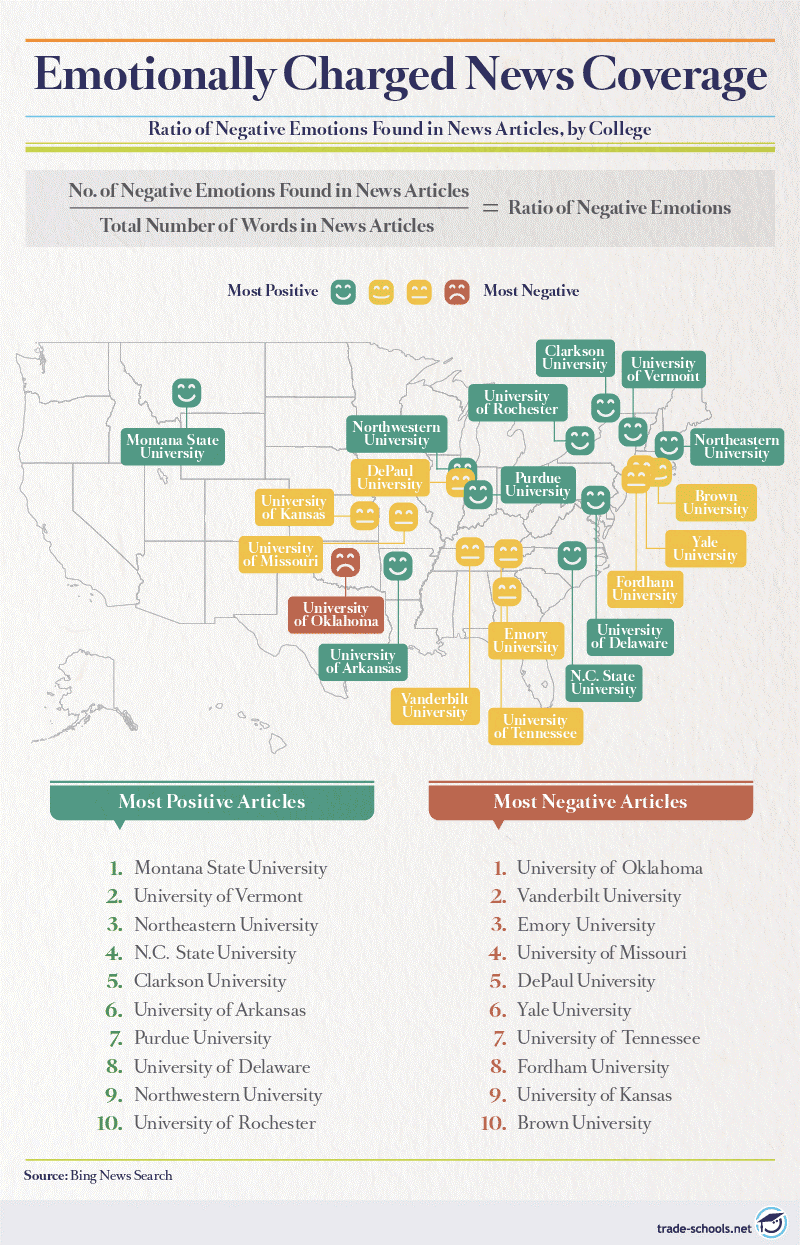 It's not an understatement to say that news coverage can often be depressing, violent, and emotionally charged. And coverage of colleges across the country is no different. This time, we parsed all the words in the top 100 articles for each school to find 74 distinctly negative emotions. We then divided that number by the total number of words used in those articles.

Overall, when looking at the map, it's clear to see that only a few universities were portrayed in an extremely unfavorable light. Unfortunately, though, these negative portrayals have the power to change more than just a few opinions; according to a study published by the Harvard Business School, media coverage of school scandals has been shown to lead to substantial decreases in school applications.

The Power of the Press

So what does this mean? Colleges will always be under major scrutiny—no matter what happens. While we all want to make the right decision about getting a good education, sometimes the best thing we can do is follow our heart. So exit out of that article you were just about to read and head over to Trade-Schools.net. A great education and dream job are only a few clicks away.

Using U.S. News & World Report's list of the top 130 national universities, we searched www.bing.com/news for the top 100 news articles about each college. Next, we scraped all the press articles and text written and separated the text by school. We then performed a sentiment analysis for each school measuring polarity and subjectivity of the press coverage. We also analyzed the news articles for a list of the most predominant positive and negative emotions to attain an emotional sentiment score. Finally, we performed a text analysis of all the words used in the news articles for each school and came up with a list of the top negative phrases contained in the articles.

We're not too cool to school you on the rules: You can use the above images for noncommercial use only. But please link back to your teachers (or the authors of this page) so we receive proper credit.