Trade Schools Home > Articles > I Hate U: Most Heated and Contentious College Rivalries

I Hate U: Most Heated and Contentious College Rivalries 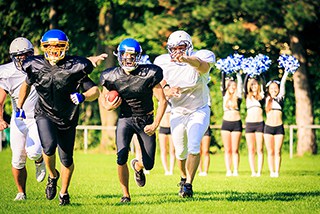 Sports rivalries, particularly at the collegiate level, stir up some strong emotions. It's far beyond a state of dislike; rather, it's a general sense of hatred. And the hatred often isn't limited to the day of a big game only, but it's an undercurrent that exists in the fibers of the student body and alumni, built up over years of back and forth. You might be a new student on your campus, but any related rivalries started well before you enrolled and will exist far beyond graduation.

To better understand just how contentious these rivalries are, we surveyed more than 2,000 people about their feelings on college feuds. We then examined their statements about rival universities and performed text analysis to highlight the most commonly used terms. Sticks and stones may break bones, but some of the leading names are definitely meant to hurt the opposing school's feelings.

(Perhaps the most rabid fans of these schools should draw more of their inspiration from the kind and compassionate people who often pursue training in areas like healthcare or animal care. We can dream, right?) 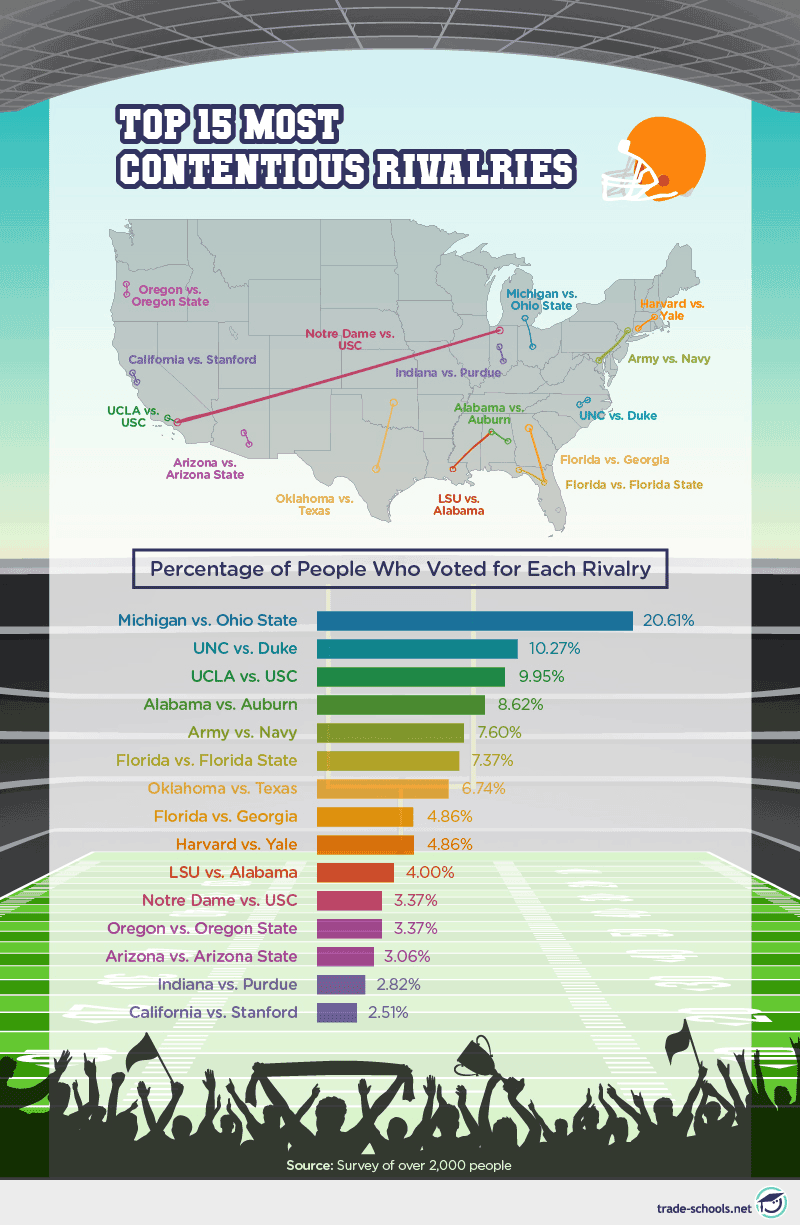 Out of more than 2,000 surveys, the rivalry between the University of Michigan and Ohio State University received the highest number of votes, earning it the title of our most contentious rivalry. Known simply as "The Game," these two schools have competed 112 times against one another in college football, with Ohio State owning the record between the two (58-48-6).

In recent years, the Buckeyes have continued their dominance, winning 13 of the last 15 games against the Wolverines. It's likely the students in Columbus wouldn't mind opening up their history books to relive the past and present successes over their rival, but this just might be the class those in Ann Arbor want to skip.

Despite the physical distance separating the two schools, the battle between the University of Southern California and Notre Dame also made our top 15. Originally concocted so that USC would have a national rival in 1926, Notre Dame and the Fighting Irish have enjoyed playing host in South Bend or traveling to Los Angeles for the games.

(Since they don't have sports teams, you're unlikely to see rivalries of this type between different cosmetology schools, skilled trade schools, or art and design schools. Maybe that's a good thing.) 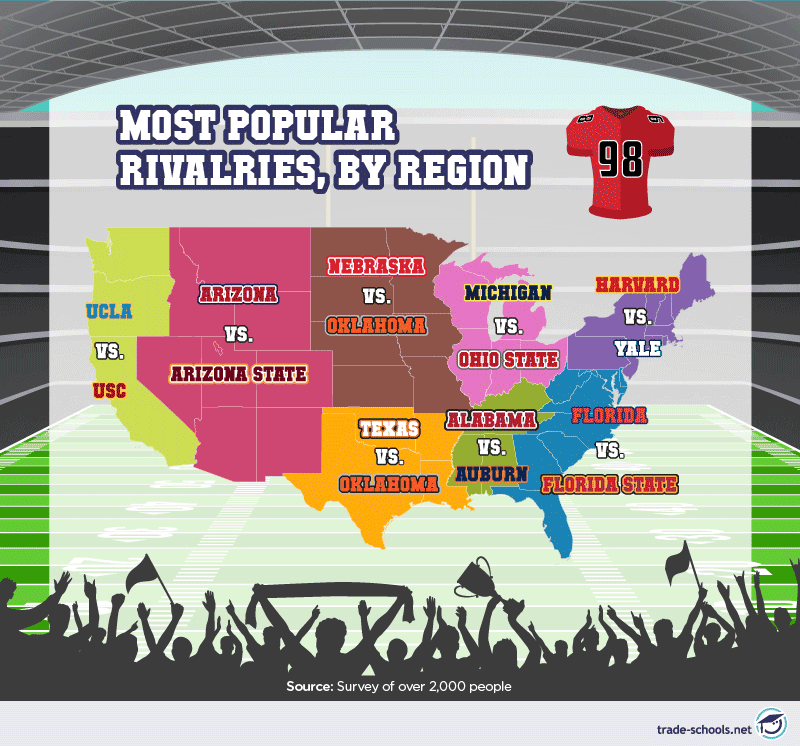 When examining the most popular rivalries by region, only the Northeast's feud contained two Ivy League schools: Harvard and Yale. These two schools squared off on the gridiron for the first time in 1875 and continued to challenge each other—in everything from academics to athletics—from that point forward.

The rivalry even featured Yale students, disguised as the "Harvard Pep Squad," tricking the Harvard student body into holding up signs saying "We Suck" at a football game between the two schools in 2004.

Although they don't play against each other regularly anymore, these two teams had a type of hatred that also included pranks. In 1907, Oklahoma students descended upon Nebraska's campus to bury a sacred geological rock as a way to enhance their rivalry and school spirit, and the tradition continued through the 1920s. 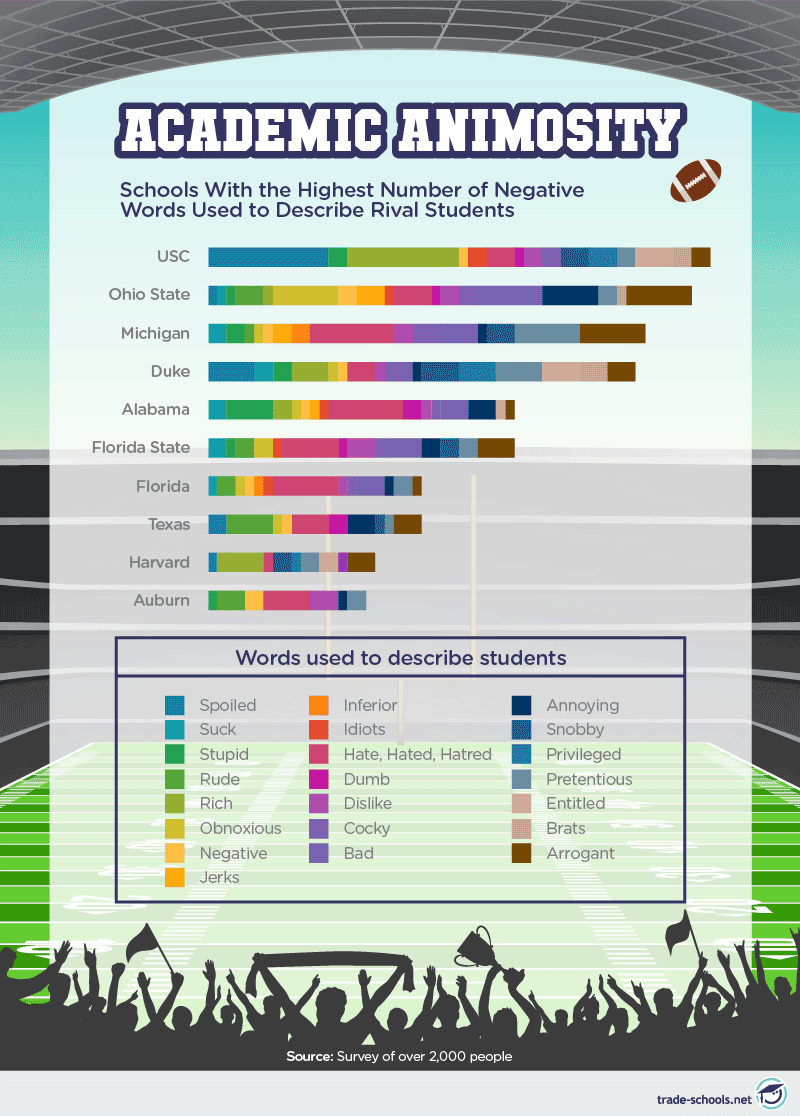 Situated in the Great Lakes, Ohio State University also inspired a fair share of angry adjectives from rival students. The Buckeyes were described as both "arrogant" and "obnoxious." In fact, Ohio State is often found populating online top 10 lists recognizing the Columbus students as part of an "obnoxious college football fan base." Based on our research, many students believe the school should top each of these lists. 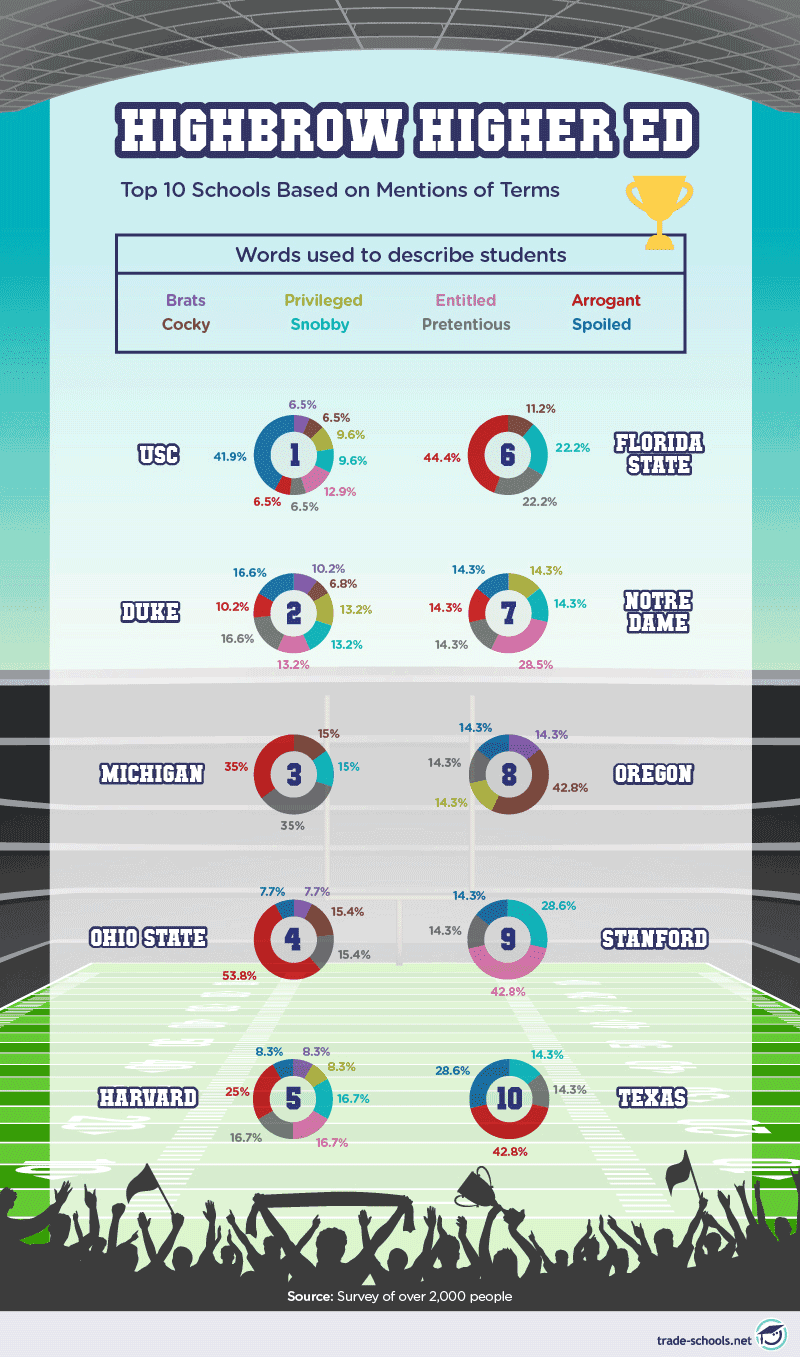 Several surveyed individuals commented on the pretentious attitudes of certain student populations. Notre Dame and Stanford both received a significant number of comments regarding this "entitled" behavior. Both schools also had double-digit "snobby" student mentions.

(Want to go to school with people who are more down to earth? Find a vocational college or trade school and experience the company of students who actually value every opportunity they get.) 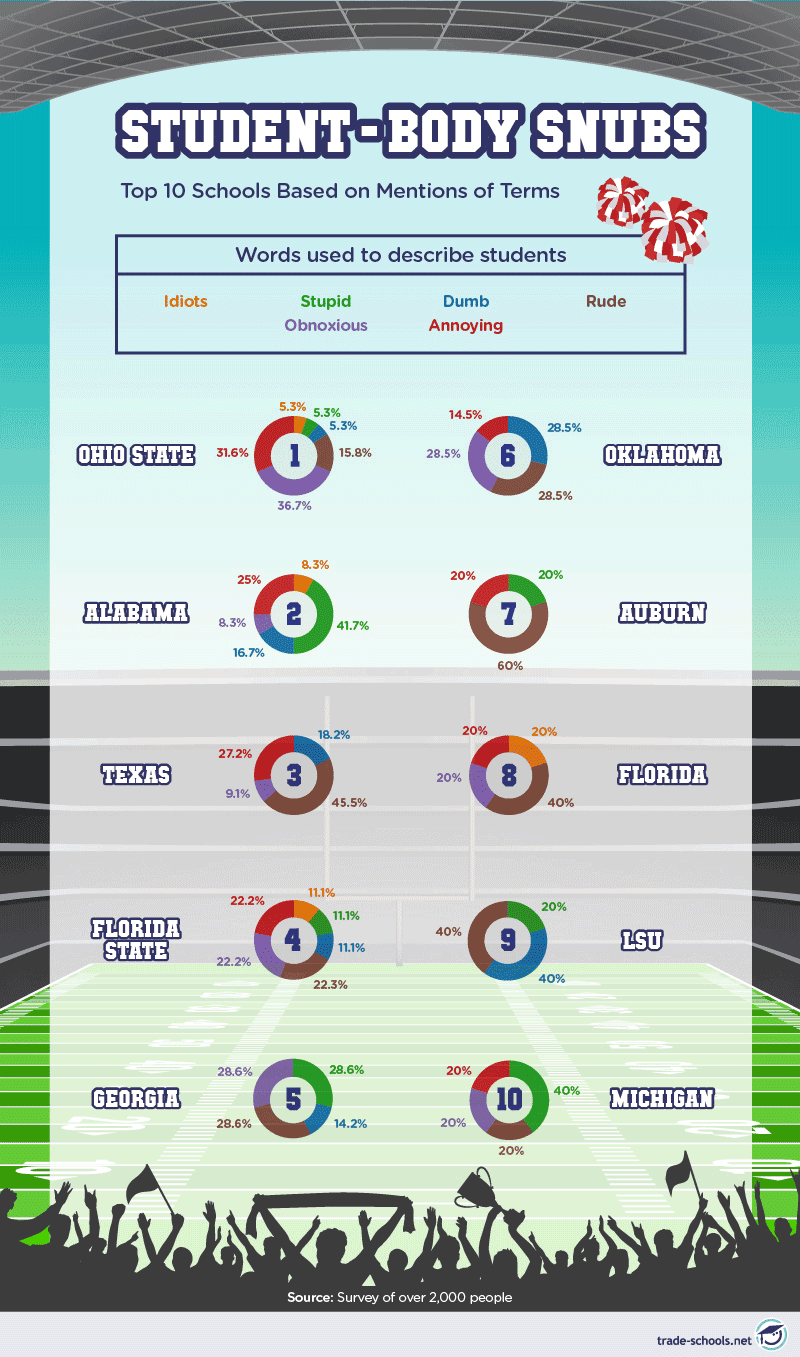 Plenty of those surveyed thought their rivals were downright dumb. Multiple comments contained direct insults to the intelligence of the students at opposing schools. As references for Alabama's Crimson Tide and Michigan's Wolverines, the word "stupid" rose to the top of the list. For both of these schools, at least 40 percent of the insults mentioned their rival's stupidity.

The Auburn Tigers are perceived as both "annoying" and "stupid," but most survey respondents—60 percent—defined them as "rude." Those surveyed didn't rate the student body's southern hospitality with high regard; so much for being warm and sweet!

Knowing what we know now, some college rivalries aren't just contentious—they're downright mean-spirited. In the pursuit of a bright future, financial independence, and a friendly atmosphere, don't limit yourself to schools with historic rivalries. Though century-long battles for bragging rights may sound cool, they don't define what your educational experience will look like.

Instead, examine the numerous trade school opportunities that provide an alternative, skill-based education. Discover the world of possibilities that await you and find exciting programs today through Trade-Schools.net. Let the only rivalry you're involved with be the one taking place against the best version of yourself.

We surveyed more than 2,000 people about their favorite college rivalries. We asked them to describe their feelings about their rival school. We then performed a text analysis on these words to find the most commonly used terms for each rival school.