Network administration schools can help you reach your goal of becoming a technology professional essential to your field.

Think about the advantages of getting this type of education: You'll have the chance to learn how to work with complex computer networks and sophisticated technical systems that keep people and organizations connected. Through network administration training, you may get to develop very marketable skills related to configuring, maintaining, and managing local area networks (LANs), wide area networks (WANs), and Internet and intranet systems. And you'll start learning valuable skills related to monitoring network performance, troubleshooting problems, implementing security measures, and supporting a network's users.

Plus, getting formal training in this area of information technology (IT) often makes it a lot easier to attain the types of network administrator certification that many employers look for. As a result, you may be able to pursue job opportunities in organizations of every size and in almost any industry where computer networking is required. So discover a nearby program right now by entering your postal code into the following school finder! 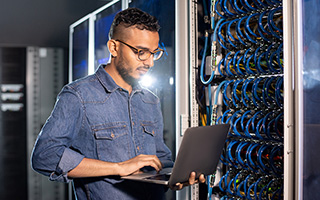 Every developed nation on Earth now relies on secure and efficient computer networks for fast information sharing. Canada is certainly no exception. In fact, networking is a core technology that enables our country's businesses to innovate, grow, and compete at the global level. And well-designed and maintained networks also help Canada's schools, government agencies, and other organizations stay relevant and effective in this constantly changing world.

It's also impossible to overlook the importance of networks to individual Canadians and their families. For example, one report says that almost 75 percent of Canadians spend at least three to four hours a day using the Internet, the world's largest and most complex network. And about 34 percent of all people in this country use the Web most often with mobile devices such as smartphones, which are connected to extensive cellular networks and allow people to go online almost anywhere.

That's why it is hard to overstate the positive impact that networking professionals have on our lives. They help keep everything running. And for their essential contributions, they often earn great incomes. In fact, the average network administrator salary might be higher than you realize.

Learn more about computer networking careers right now by checking out the answers to the following frequently asked questions:

1. What Is Network Administration?

Network administration is the process of keeping a system of interconnected computers, servers, and other electronic devices and equipment operational, efficient, and secure. It's all about managing networking technology in a way that allows computers and their users to quickly and reliably access data and share information with each other. And it's about ensuring that only authorized people are able to access certain systems and databases.

That's what makes network administration so important. The stability and security of computer networks is critical to the success of most organizations. When networks are illegally breached or stop working, organizations can suffer from financial losses as well as reduced productivity and poor reputations.

But managing networks is frequently a complex process. It requires trained professionals who know how to configure and maintain components such as:

2. What Are the Most Common Job Titles in the Field of Network Administration?

Network technology professionals have all sorts of job titles. Truth be told, a consistent standard doesn't exist. When you have a career in this field, your job title is usually dictated by the employer you work for. And different organizations often have different ways of referring to people with this occupation. For example, some of the various job titles that are used in Canada include:

3. What Does a System Administrator Do?

Regardless of their job titles, people who work in the field of network systems administration get to enjoy some of the most valued and fascinating roles in IT. They often handle a compelling variety of tasks that are geared toward keeping networks secure and running smoothly. Although particular tasks vary from one employer to the next, a typical network administrator job description frequently includes duties such as: 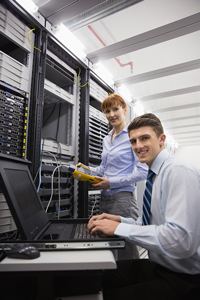 Those are some of the most common network administrator roles and responsibilities, but people with this occupation often have additional duties beyond the ones listed above. For instance, a network manager job description at a telecommunications company may include duties related to ensuring that specific government regulations are being followed. Or a senior network administrator job description at another company may include some hiring and supervisory duties.

4. How Much Does a Network Administrator Make?

Data from the Government of Canada's Job Bank indicates that during the 2016-2017 fiscal year, the median network systems administrator salary in Canada was about $66,664, which is equivalent to $32.05 per hour. Of course, most people begin their careers at the entry level and progressively earn higher wages as they acquire experience and move into higher positions. So, for example:

Location also plays a significant role in determining the computer networking salary that you might earn. As an example, take a look at the provinces with the highest median wages for networking professionals, according to Job Bank data:

5. What Does It Take to Become a Network Administrator?

In order to become an entry-level network administrator, you will probably need to, at minimum, complete a formal technical or vocational training program and also earn at least a few popular certifications. Fortunately, a lot of network administration programs only take around seven to 10 months (in comparison to the four years that earning a computer science degree would take). And some programs take even less time if you're only looking to learn the very basics and become a support technician.

When it comes to network administrator certification, the options vary a lot. Plus, different employers may prefer different credentials since certifications are often vendor-specific and related to particular brands of networking hardware and software. So it's often wise to research your potential employers before pursuing certain credentials. However, some of the most commonly sought-after certifications include:

Keep in mind that some of the examples listed above are considered advanced certifications for people with at least a few years of experience. Plus, when you're applying for jobs as a network administrator, requirements of this nature are sometimes not explicitly listed. So, instead of assuming that an employer's network admin job description is complete as stated, don't be afraid to ask questions.

6. Is the Outlook Good for Networking Specialists? 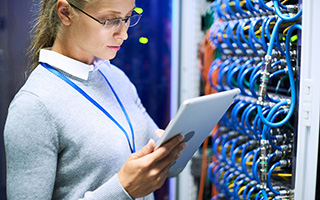 Yes, especially since computer networks keep evolving. Just consider how much they've advanced already. Today's networks are a long way from the slow and cumbersome systems of the 1970s that relied on stationary terminals connected to large mainframes. Ongoing advances in technology have given us super-fast wired and wireless networks that allow us to connect small mobile devices, store our information in "the cloud," and take advantage of the Internet's almost limitless potential.

In fact, one report says that the number of network-connected devices is projected to expand by about 72 percent in Canada between 2018 and 2023. By the end of that period, there will be about 11 such devices for every Canadian, which is an increase of 65 percent over just five years.

As networking technology continues to evolve, so will the opportunities. Organizations of every variety will need network administrators and technicians with the expertise to transition to (and manage) new technologies that provide better security, more stability, higher speeds, and fresh advantages that few people can even imagine right now. Internet-connected wearable devices and smart appliances are only the beginning. The world's electronic networks are set to keep expanding exponentially.

That's one reason why, from 2017 to 2026, about 22,300 job openings are expected to become available in Canada for computer networking professionals, according to Job Bank data. In this field, there is always more to learn because there is always something new on the horizon. Employers will continue to need the services of networking professionals who love evolving their skills while learning about the latest technological advances.

Computer networking is an opportunity-rich field that continues to need new professionals with the drive and enthusiasm to make an impact. So make a new start and build the future you want. Enter your postal code into the search tool below to quickly find network administration schools in your region!