Audio engineering schools can match your enthusiasm for sound and music with training that can allow you to make a career out of that passion. They can hook you up with access to professional-quality recording tools while teaching you what goes into producing the things we all love listening to.

So give yourself permission to go after the goals you truly want! They can happen. All it takes to start the process is to send a quick request for information to one or more of the audio production or sound engineering schools listed below.

Why Audio Engineering and Production Is an Attractive Career Choice

Why Audio Engineering & Production Is an Attractive Career Choice 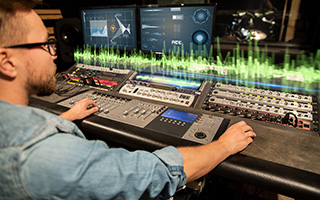 Advances in technology keep opening the door to more and more possibilities for creative expression. And sound plays a significant role in a majority of them. For instance, consider how widely used musical compositions and audio effects are in movies, TV shows, video games, and online media. Then take into account the many live events that happen every day. From concerts to corporate seminars, the need for professionals who understand things like acoustics and in-the-field sound mixing and recording is tremendous.

The potential for attaining a fun career in sound is evidenced by the money generated in Canada's multimedia industries. Check out these facts: 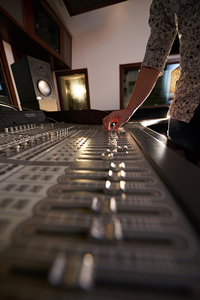 Understanding how sound works and what it takes to capture, create, or process it is a valuable set of abilities that can be used in a wide range of different ways. And because professional audio is needed for so many forms of media, a person's career in this field can overlap a variety of enjoyable areas. So as you begin exploring where your own potential might lie, think about the following general roles, starting with the differences between an audio engineer and a producer:

Audio engineers are mostly involved in the technical parts of the work. That is, they handle physical equipment and/or operate digital audio workstations (DAWs). And they usually specialize in just one or a few particular aspects of the recording, editing, mixing, and mastering process. For example, some sound technicians or engineers may work primarily with microphones, preamps, and amplifiers. Others might work behind a mixing console or assist with editing captured audio on a DAW system like ProTools or Logic Pro.

Sound and music producers are like directors. They coordinate everything, managing both audio engineers and any musicians or vocal talent being used. A producer often brings his or her own creative sensibilities and vision to a project and may even contribute some songwriting or performing.

Independent recording engineers and producers are often on the go and work in all kinds of different places as professionals who contract their services on a project-by-project basis. They frequently use portable equipment to capture and produce quality audio for anything from live event broadcasts to radio segments to podcasting and online streaming.

Professional recording engineers and producers typically work for a well-equipped studio or in a live setting for a particular act or venue. Just like professionals in independent recording, they can get hired to provide services for all kinds of interesting projects, from music albums to game sounds to movie voiceovers.

Electronic music artists and producers specialize in the use of digital software such as Logic Pro or Reason to create unique audio compositions or live entertainment. Although they sometimes make use of traditional instruments, they typically stick to devices like samplers, MIDI sequencers, and synthesizers to create the sounds they need.

For audio producers, the numbers from Job Bank are just as compelling. Within Canada, the median wage for professionals in the category that also includes producers of other media is $30.00 per hour (about $62,400 annually). Their wages can go up to $44.62 or more per hour (about $92,810 annually).